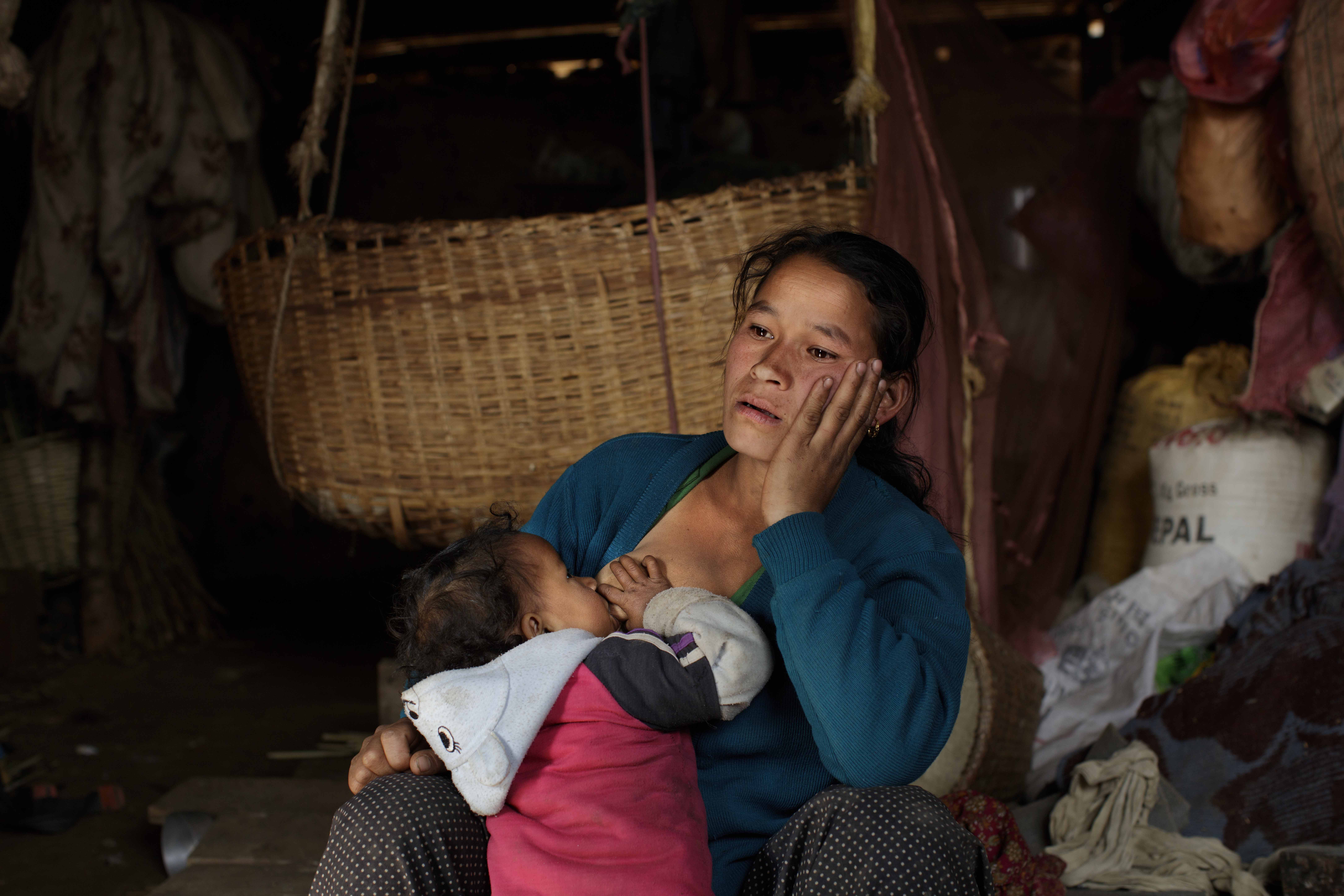 Niruta dresses her youngest child, 11-month-old Kusum, at home. Niruta and Durga were married 9 years ago, when they were just 14 and 16 years old in the Kagati village of Nepal. The 2015 earthquakes devastated Nepal and left girls and women in an increasingly vulnerable position, leading experts to believe child marriage rates will increase over the coming years. 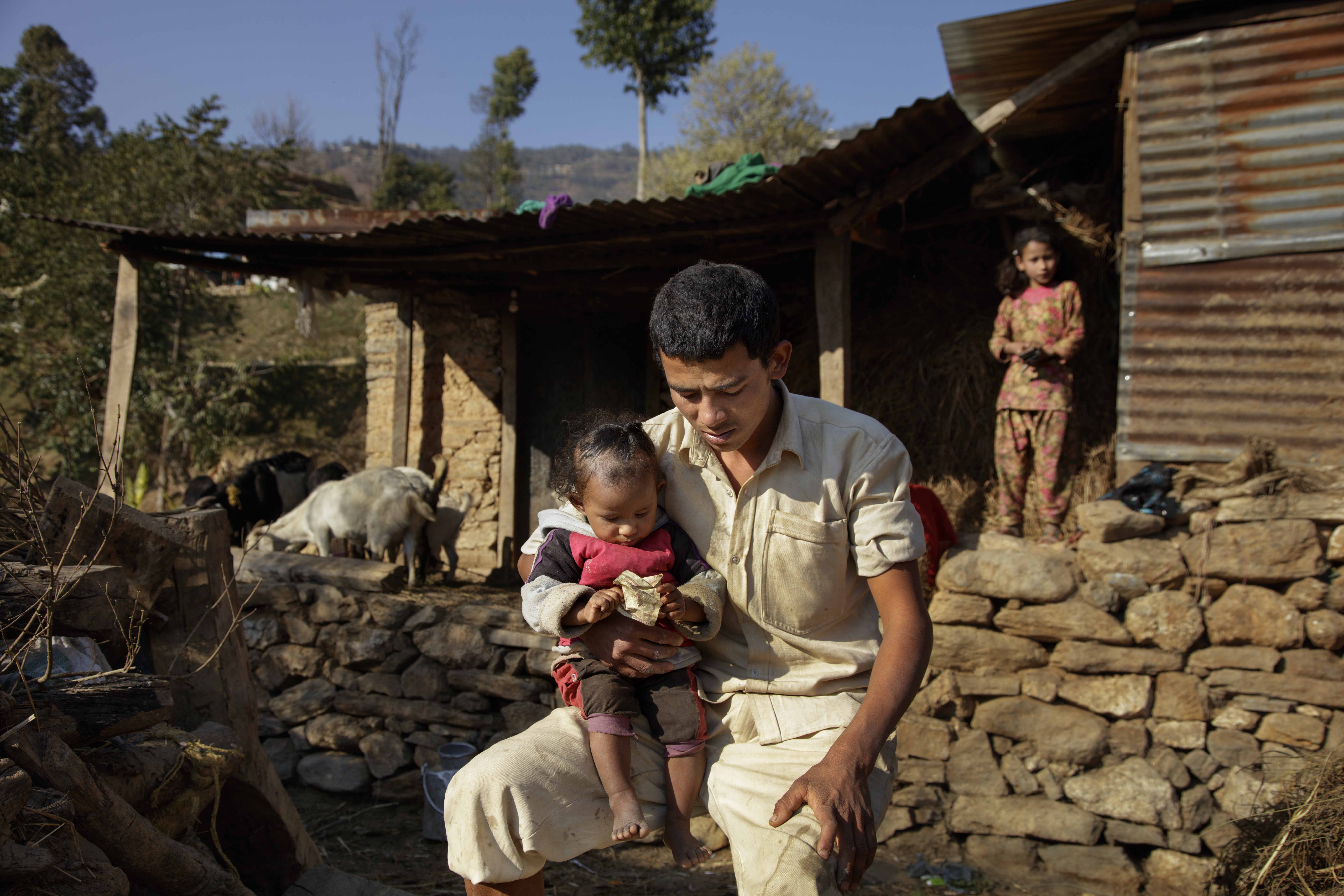 Holding his youngest child, Durga, now 26, sits in frustration in front of the rebuilt shed he shares with Niruta, now 24, their three children, a water buffalo, and a handful of chickens and goats. 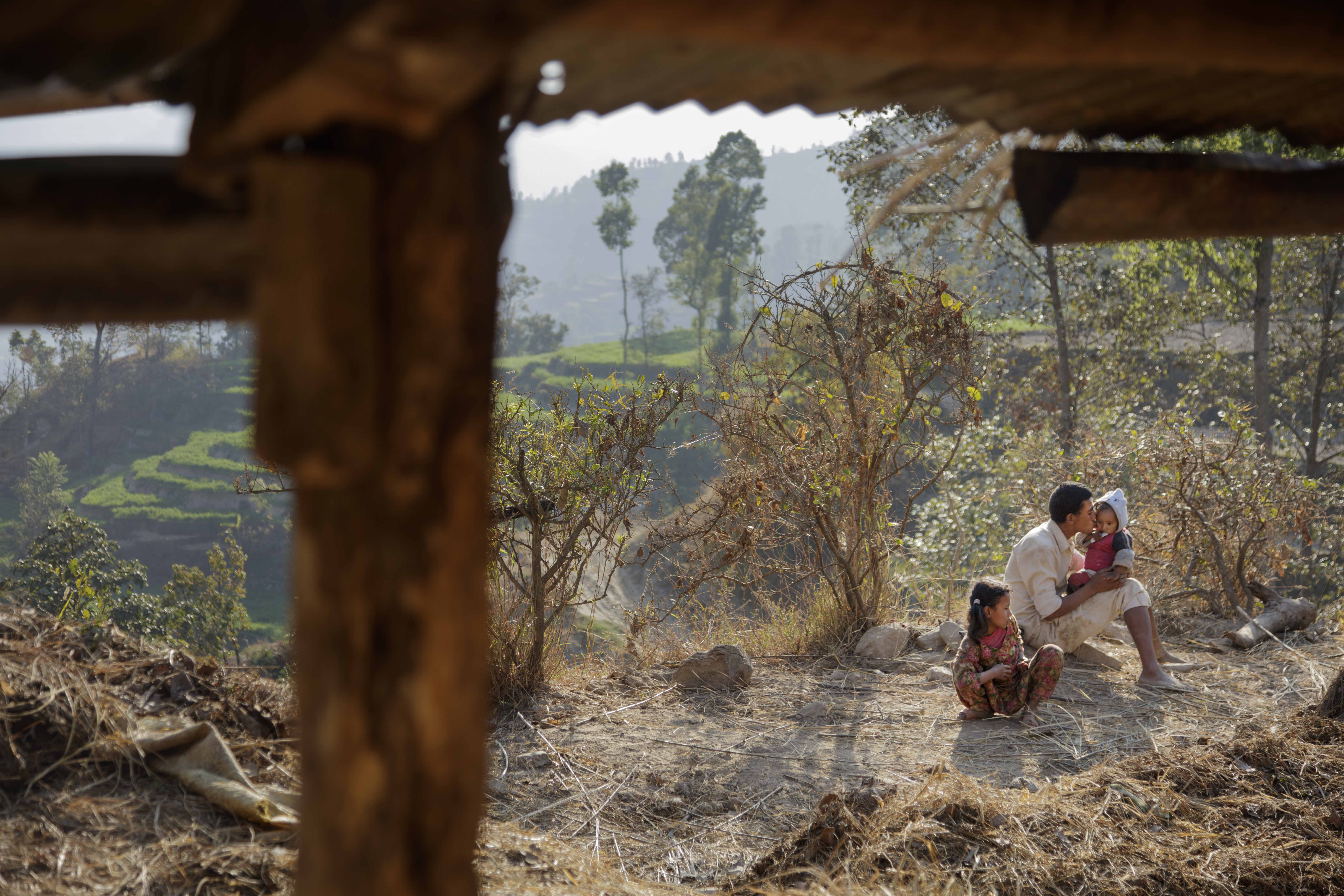 Durga kisses his youngest daughter, 11-month-old Kusum, while Sumitra, 10, sits nearby. “Of all our children, he loves her the most,” Niruta said of Durga and the baby. Durga wants her to become a doctor. 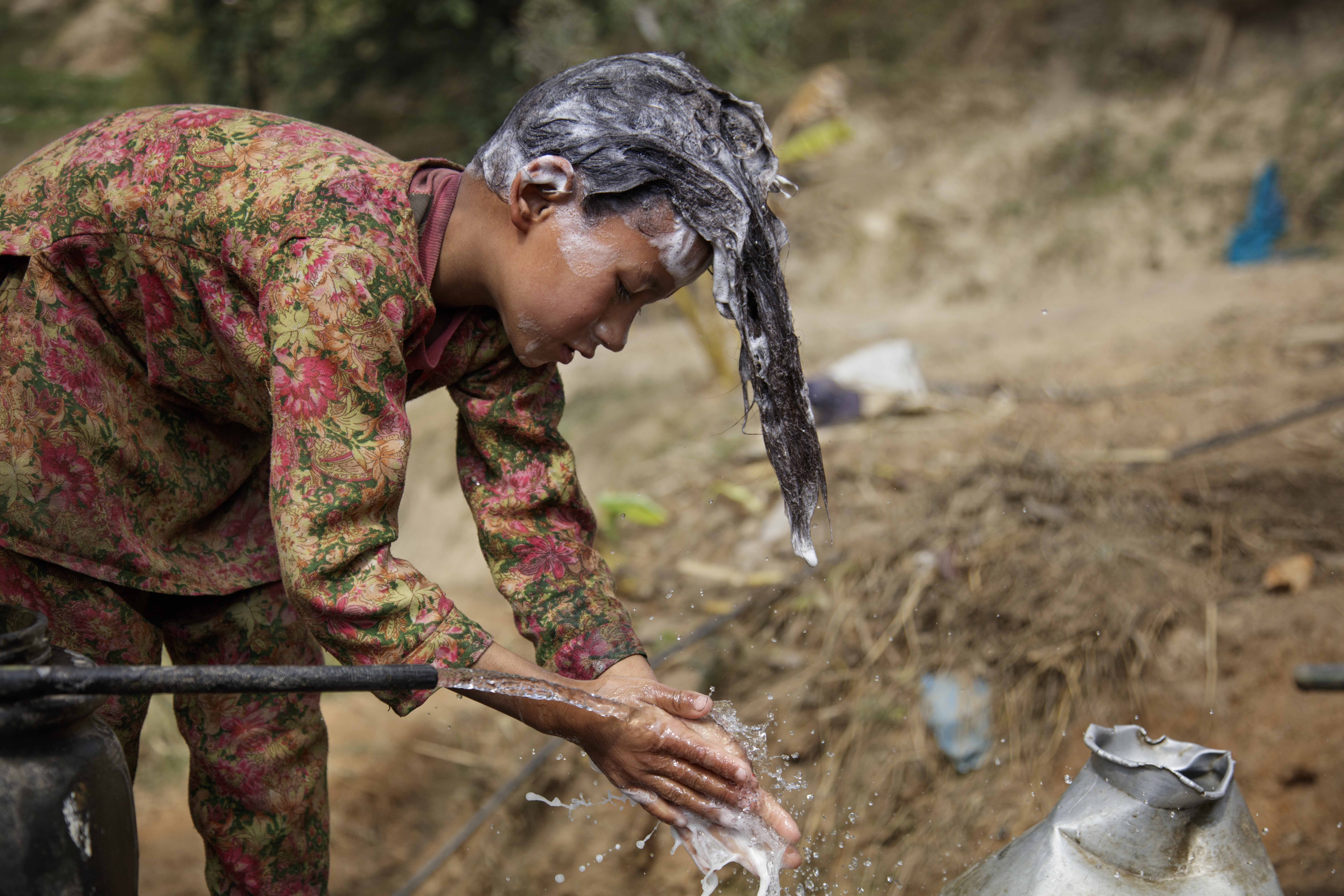 Durga and Niruta’s oldest child Sumitra, 10, washes her hair outside the cow shed one afternoon. 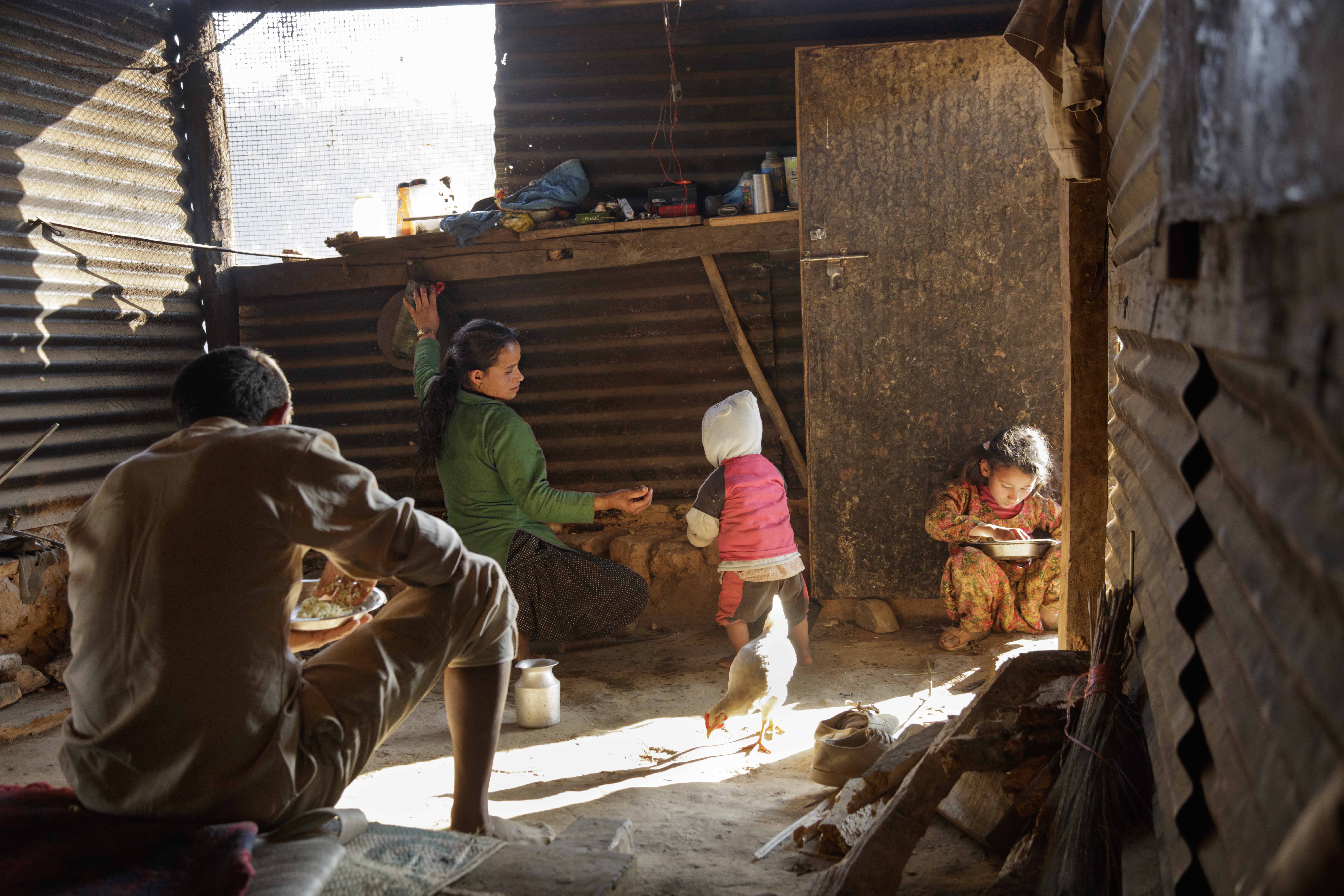 Niruta cooks breakfast for Durga and their kids before they go to school. 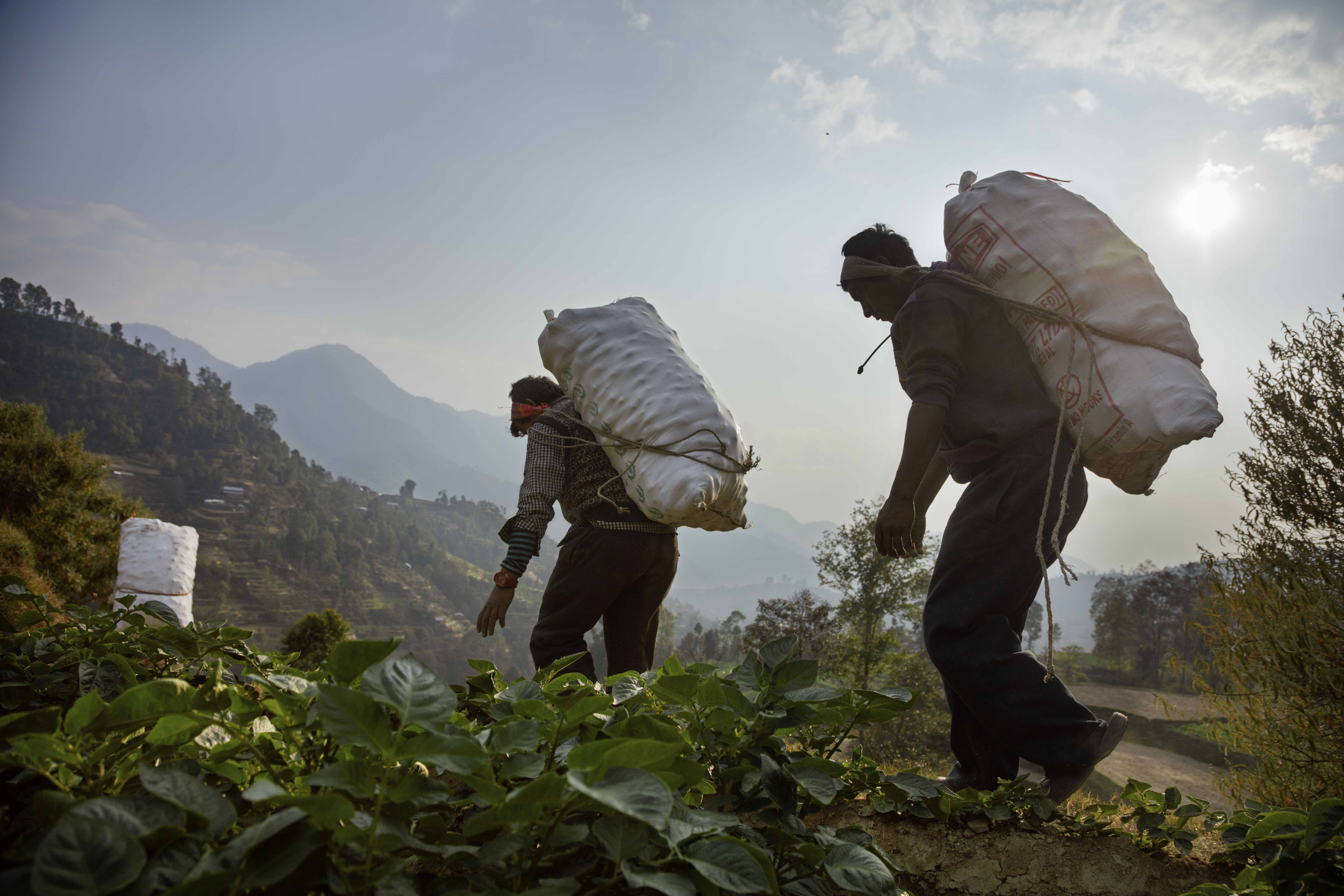 Heavy sacks of potatoes from Durga’s farm are taken down the hill to be sold. Most members of the community work on an exchange labor basis. When one family needs help harvesting, family and neighbors come to help with the workload in exchange for food and beverages. It is expected that they will do the same for each of these community members when the time is needed. 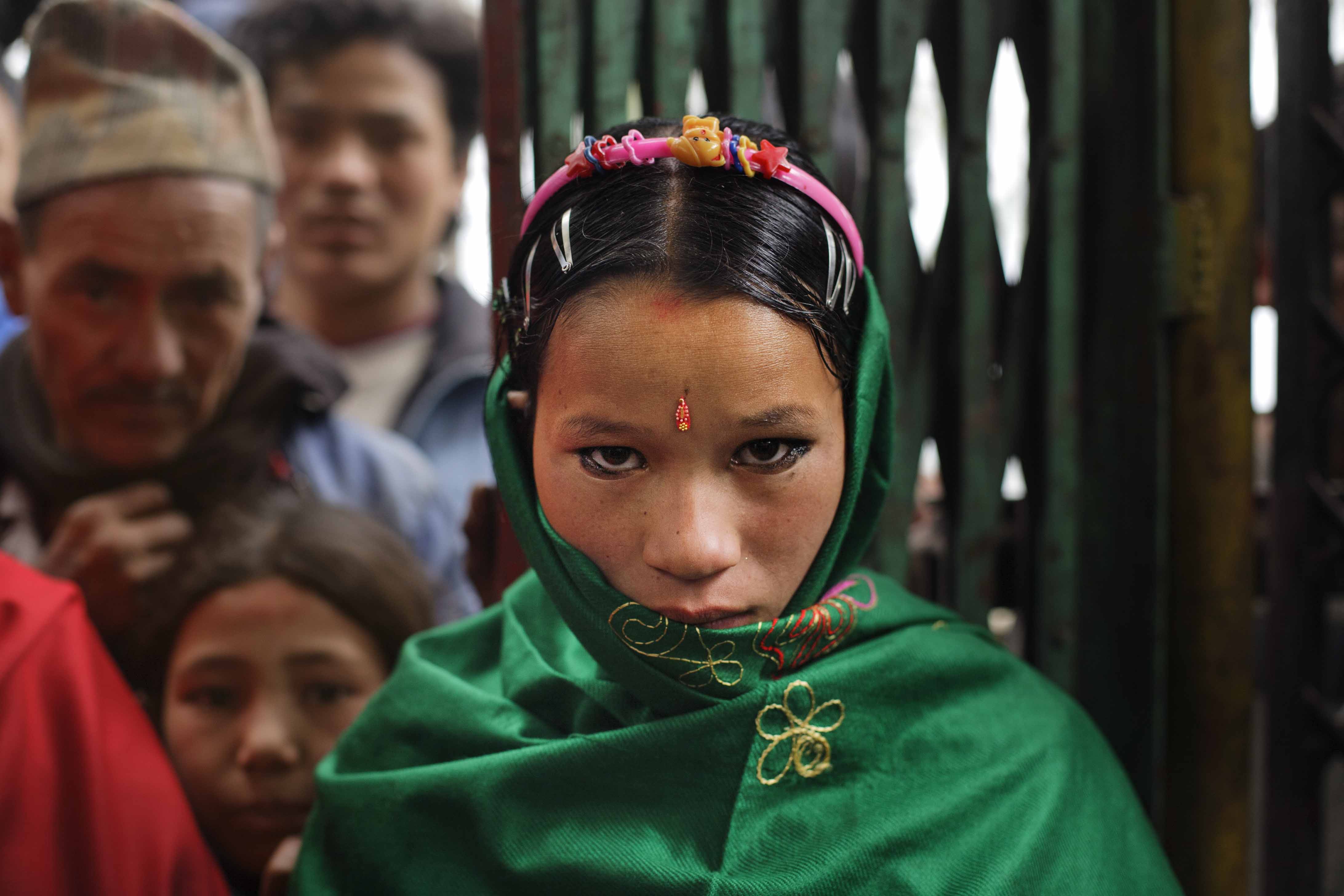 A nine-months pregnant Niruta, 14, arrives at her wedding ceremony in Kagati village Nepal on Jan. 23, 2007, which was the auspicious day of Vasant Panchami, a Hindu holiday celebrating the coming of spring. Niruta moved in with the family of Durga, 16, the year before and was pregnant three months later. 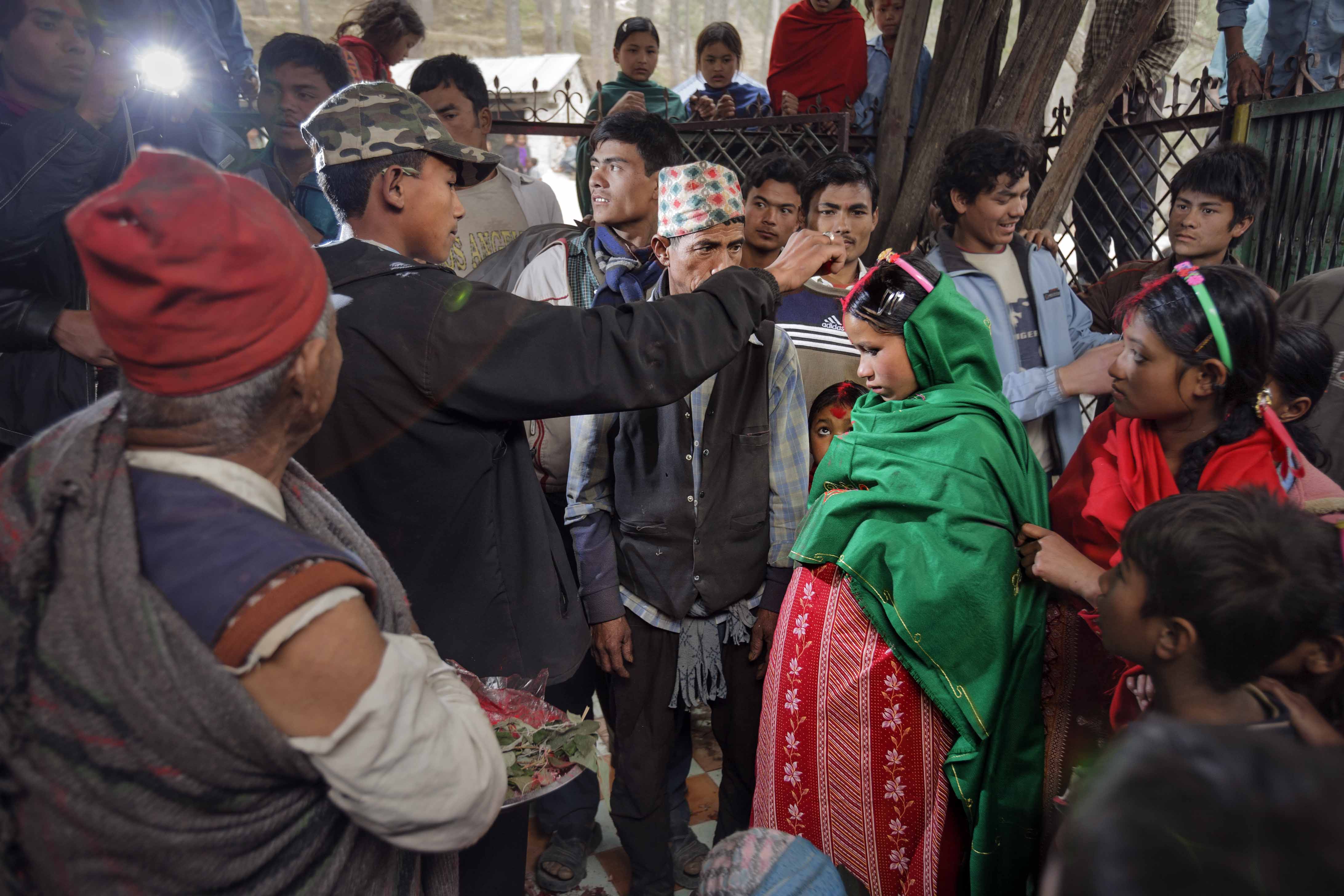 Durga, 16, applies sindoor, or vermillion powder, to his young bride Niruta’s part during their wedding ceremony in Kagati village Nepal on Jan. 23, 2007, which was the auspicious day of Vasant Panchami, a Hindu holiday celebrating the coming of spring. Niruta, 14, was nine-months pregnant during the ceremony, attended by friends and relatives. Durga’s father hadn’t liked the idea of his son abandoning his education and marrying young, but after Durga’s mother’s death, the family desperately needed help in both the home and the fields. So they found a suitable young bride. 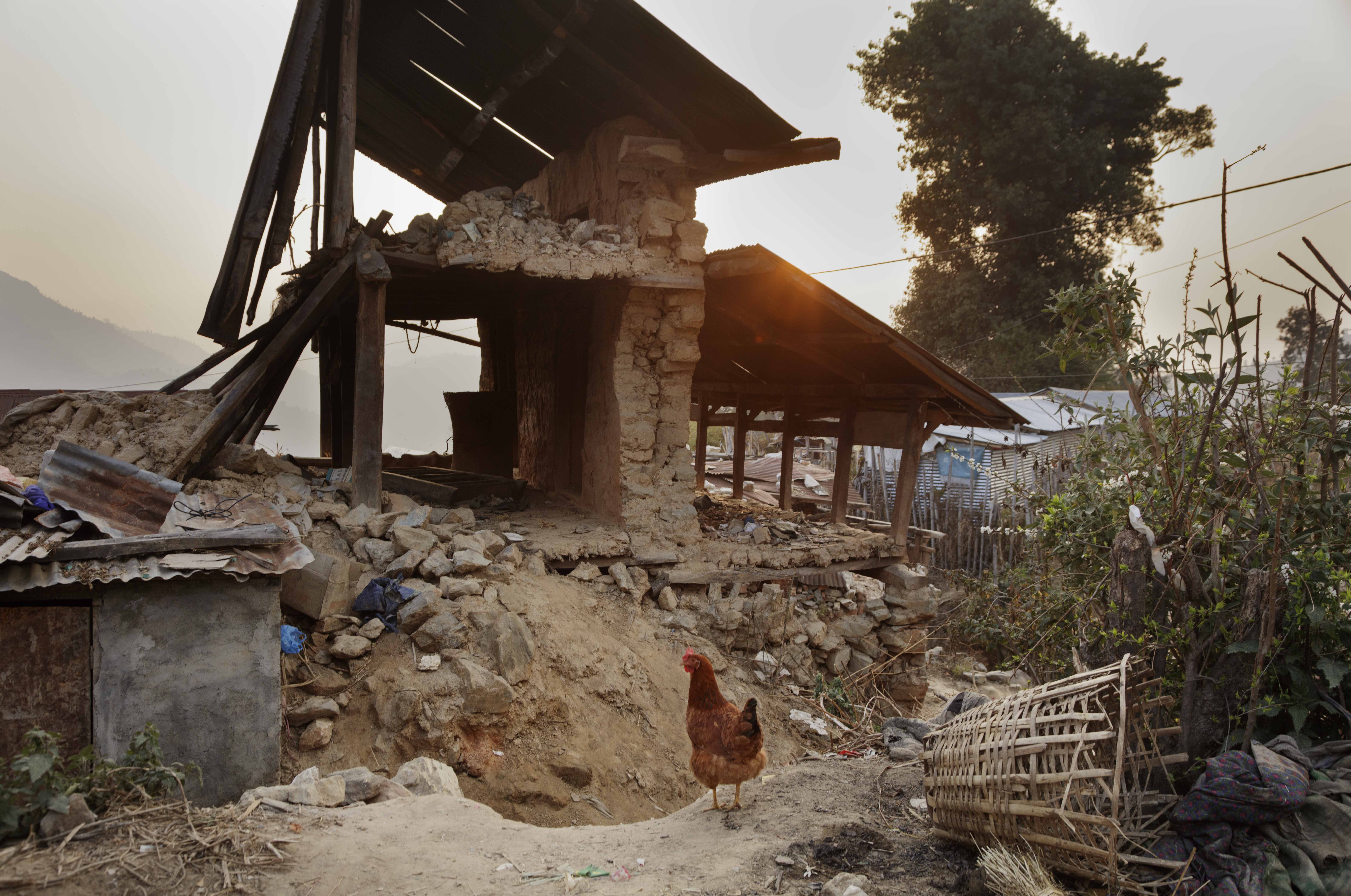 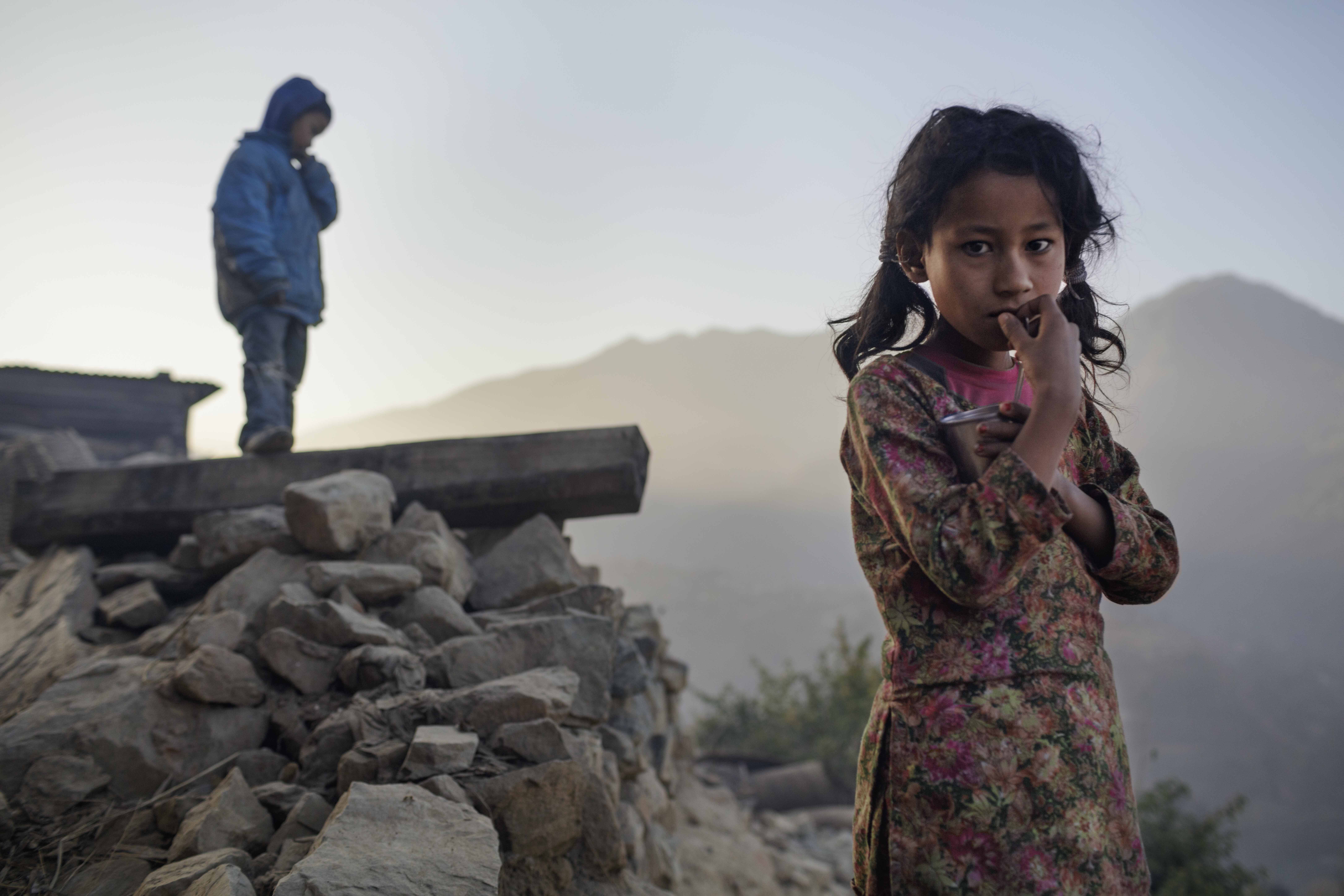 Sushil, 7, and his sister Sumitra, 10, wait for their parents to come down from the cow shed before they can have breakfast and get ready for school. The couple did not come to their temporary village home the previous night, leaving their front door locked. When this occasionally happens, the kids eat and spend the night with neighbors. The rubble and debris is left over from the earthquake. 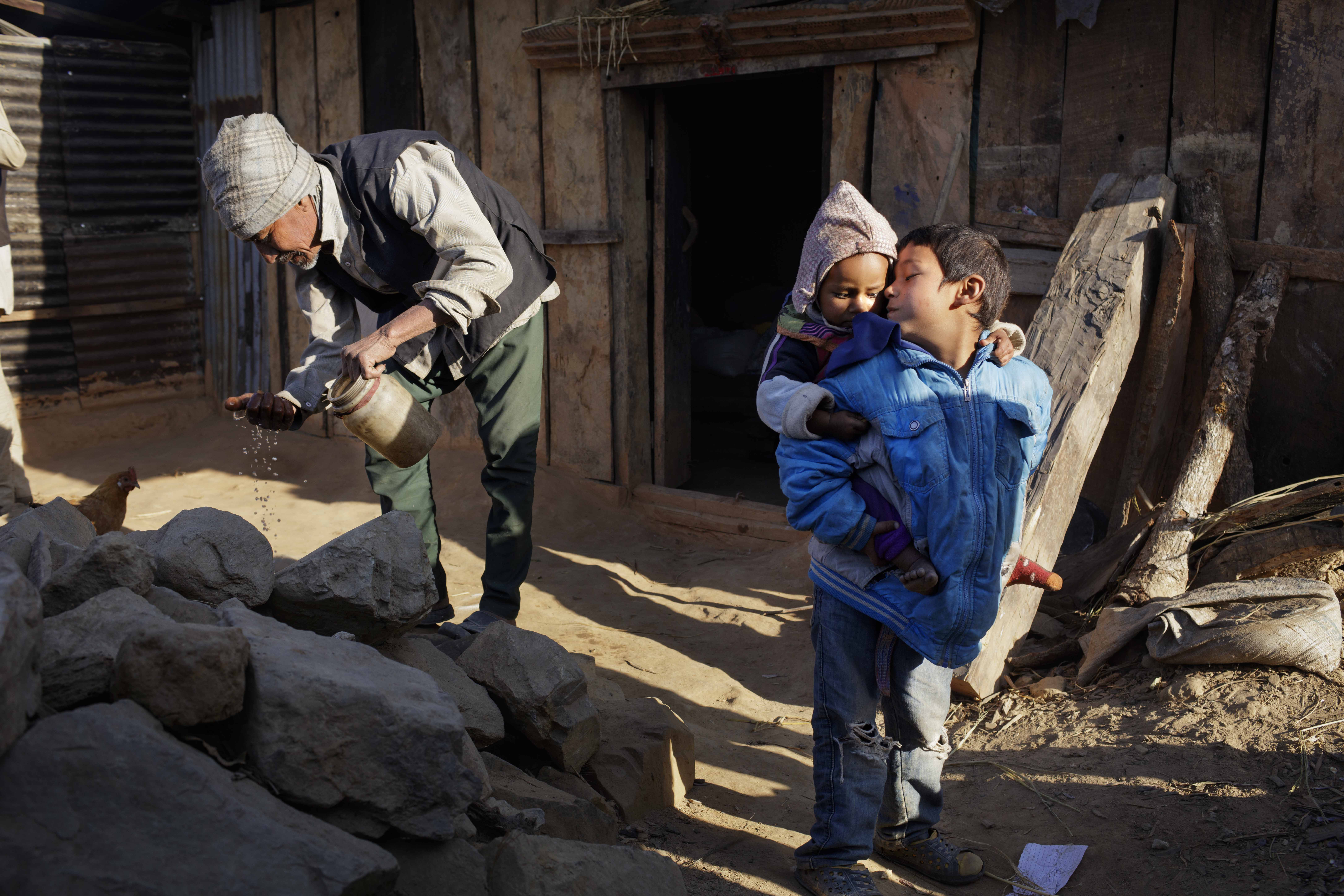 Sushil, 7, kisses his youngest sister, 11-month-old Kusum, in front of their temporary home. 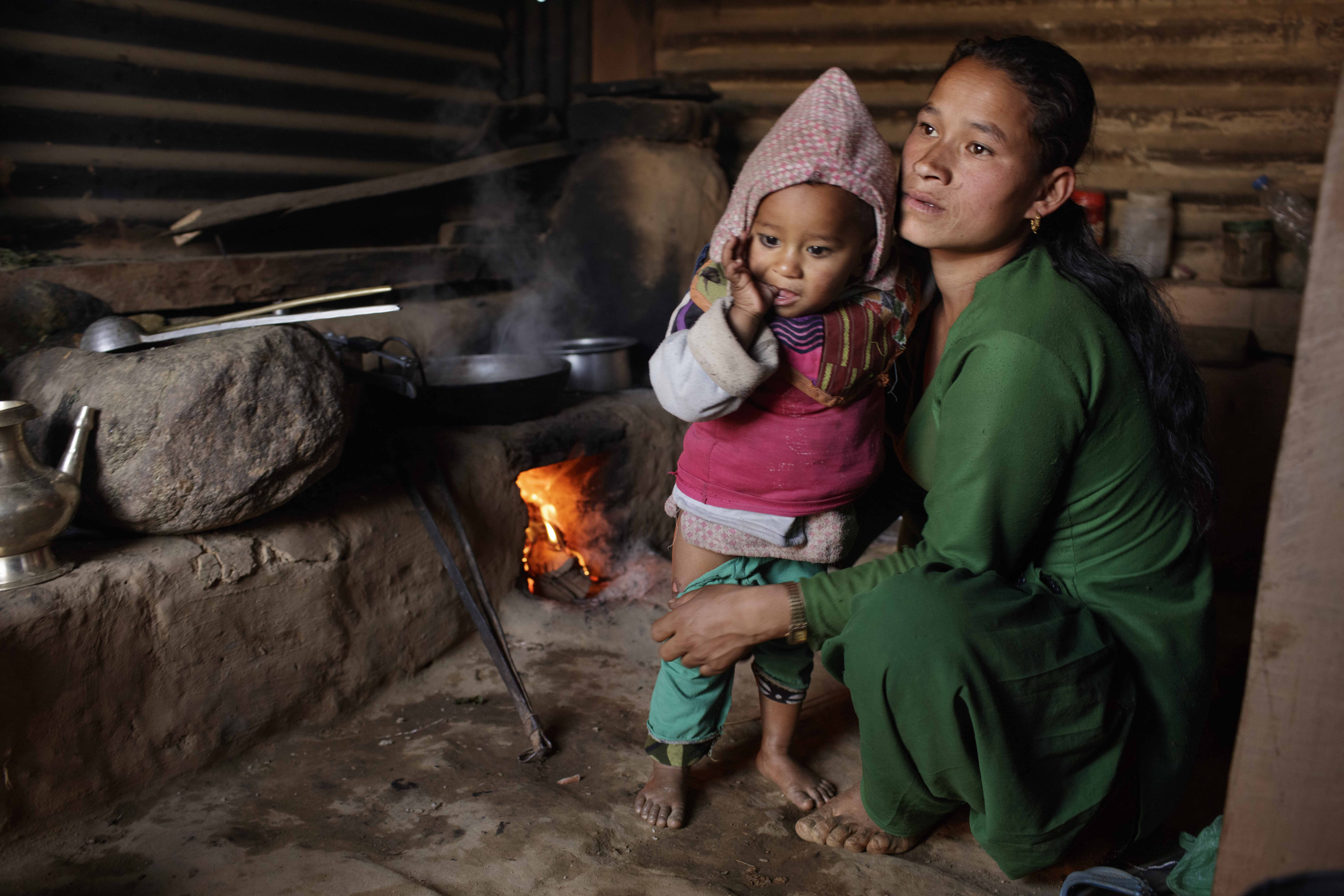