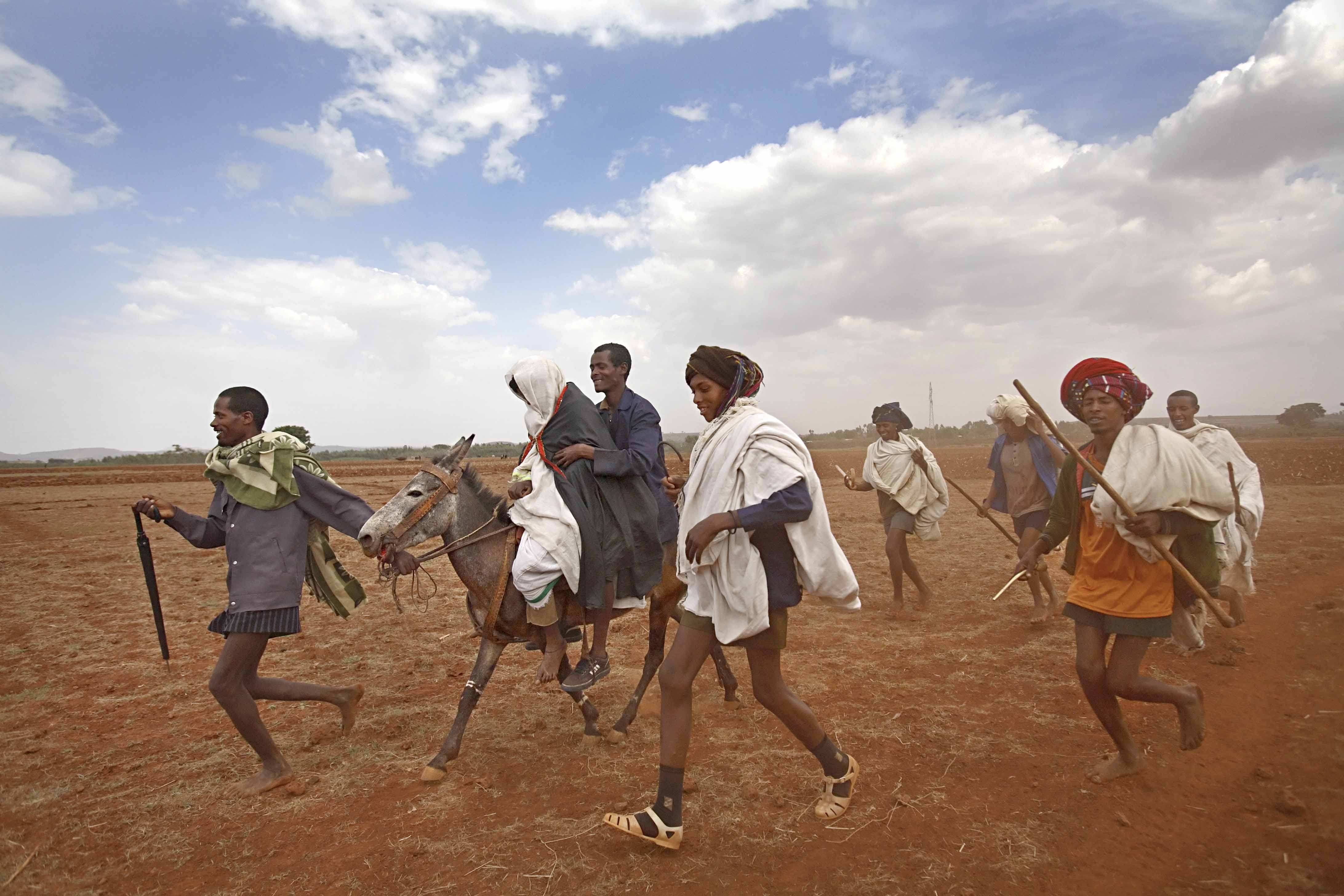 Leyualem, 14, is transported by mule to her new home. The men later said the cloth was placed over her head so she would not be able to find her way back home, should she want to escape the marriage. 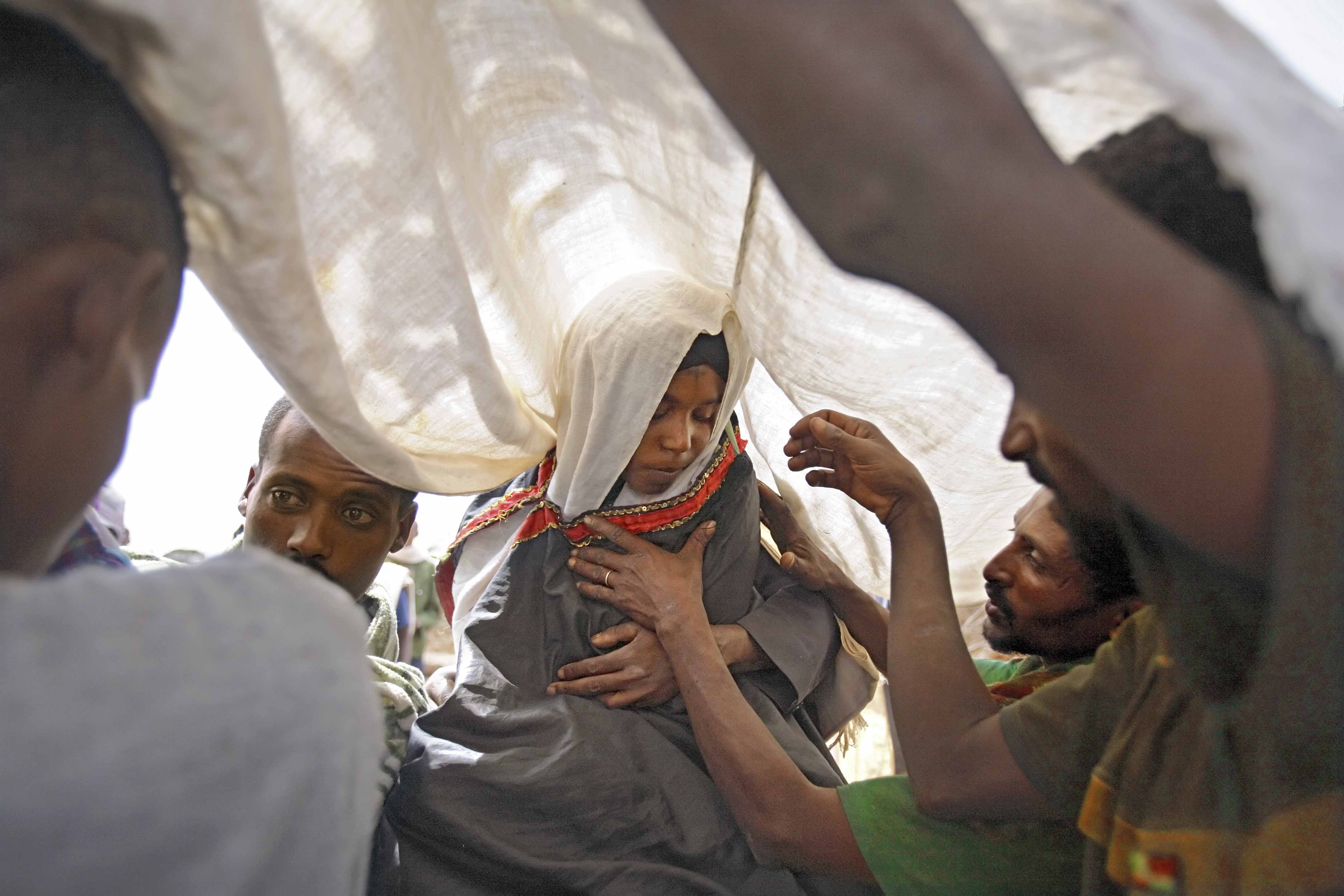 Family members place a white cloth over the head of Leyualem, 14, as she is prepared to be

whisked away on a mule by her new groom and his groomsmen in Ethiopia. 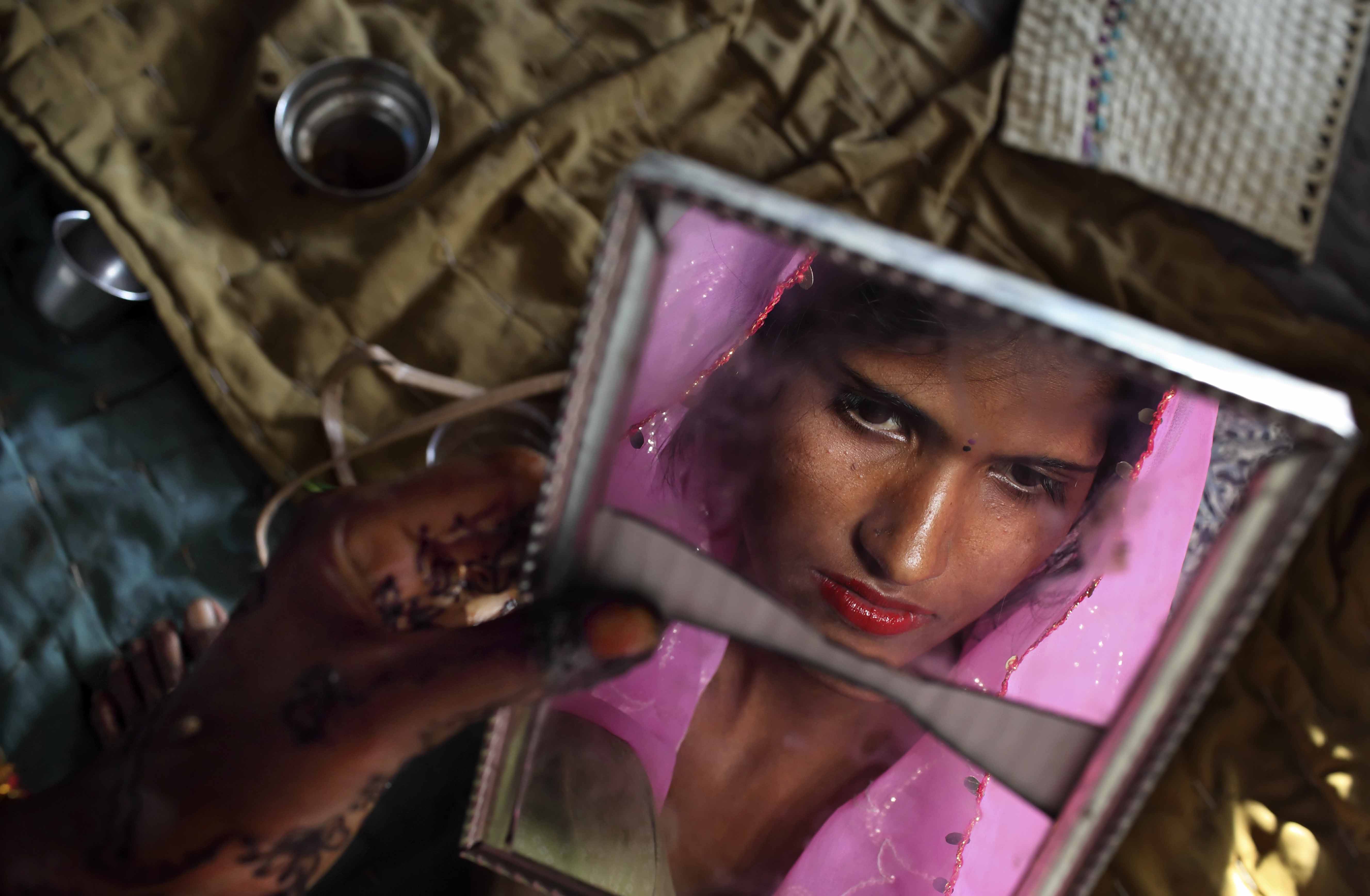 Radha, 15, observes herself in a cracked mirror the day before her wedding. Three young sisters Radha and her two younger sisters were married to three young sibling grooms on the Hindu holy day of Akshaya Tritiya in North India. 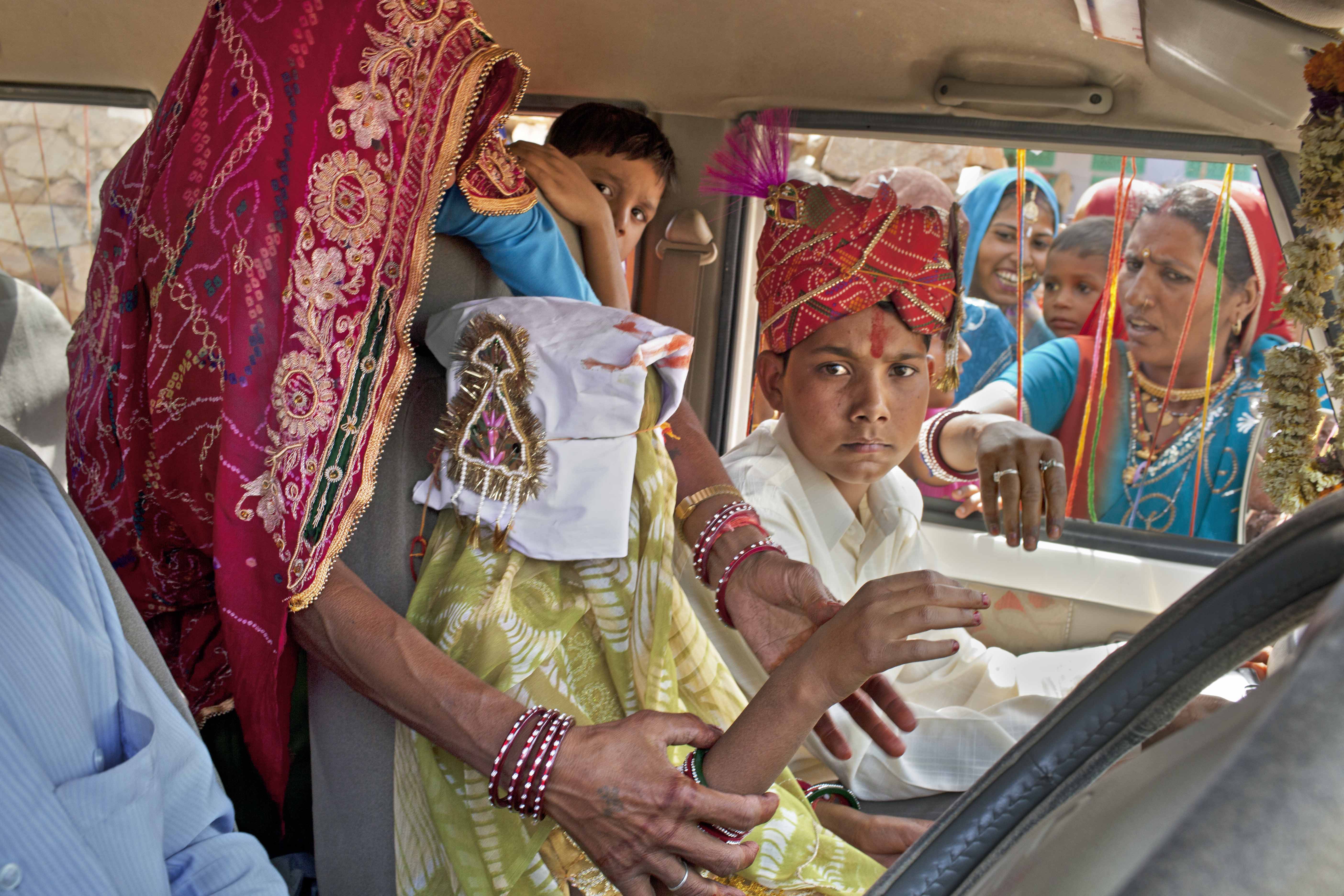 Family members escort the newly married Maya, 8, and Kishore, 13, to his family’s home. They

were married on the Hindu holy day of Akshaya Tritiya, which is said to bring good luck and is

widely known in Rajasthan as the day most child marriages occur. 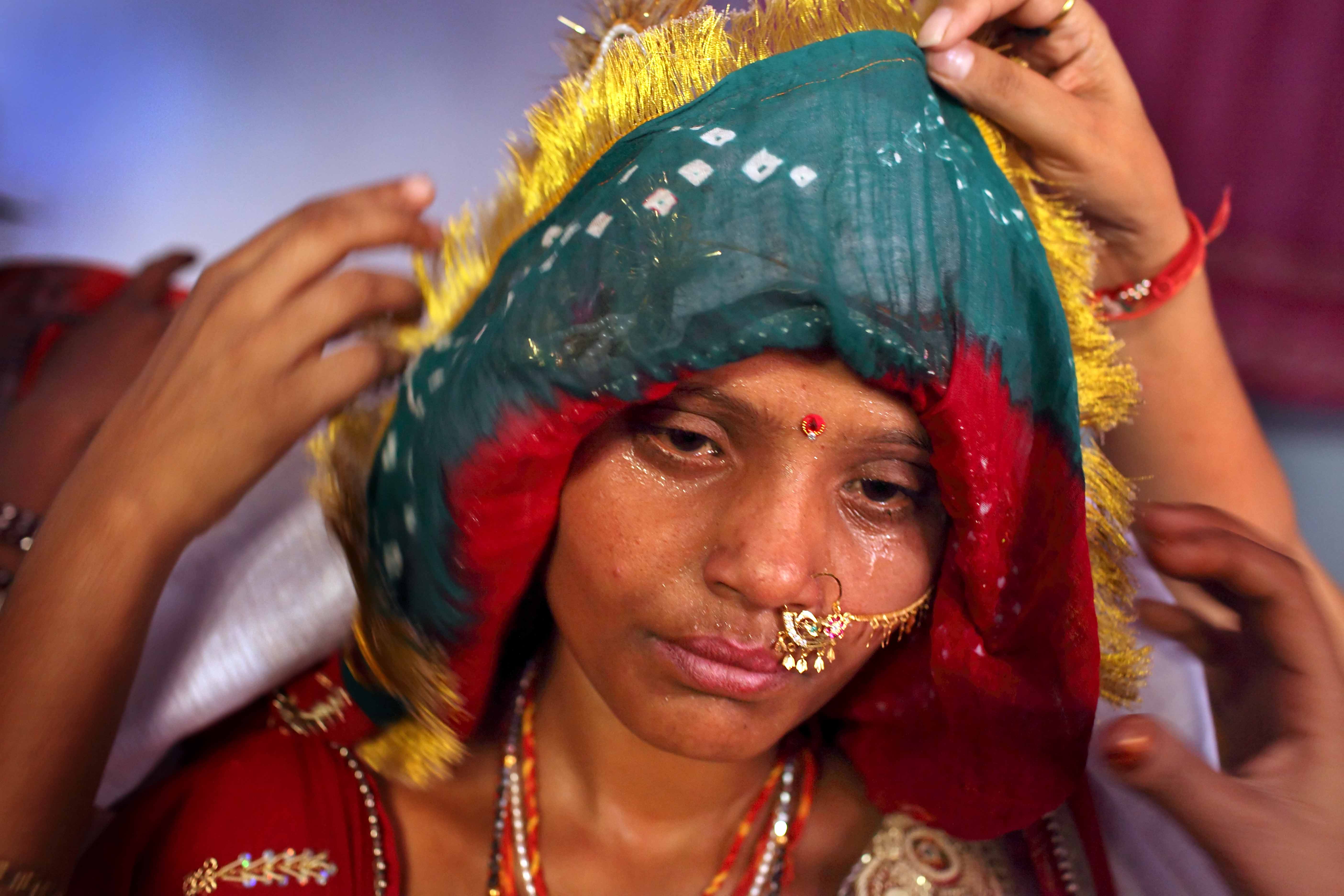 Sarita, 15, is seen covered in tears and sweat before she is sent to her new home with her new

groom. The previous day, she and her 8-year- old sister Maya were married to sibling brothers. 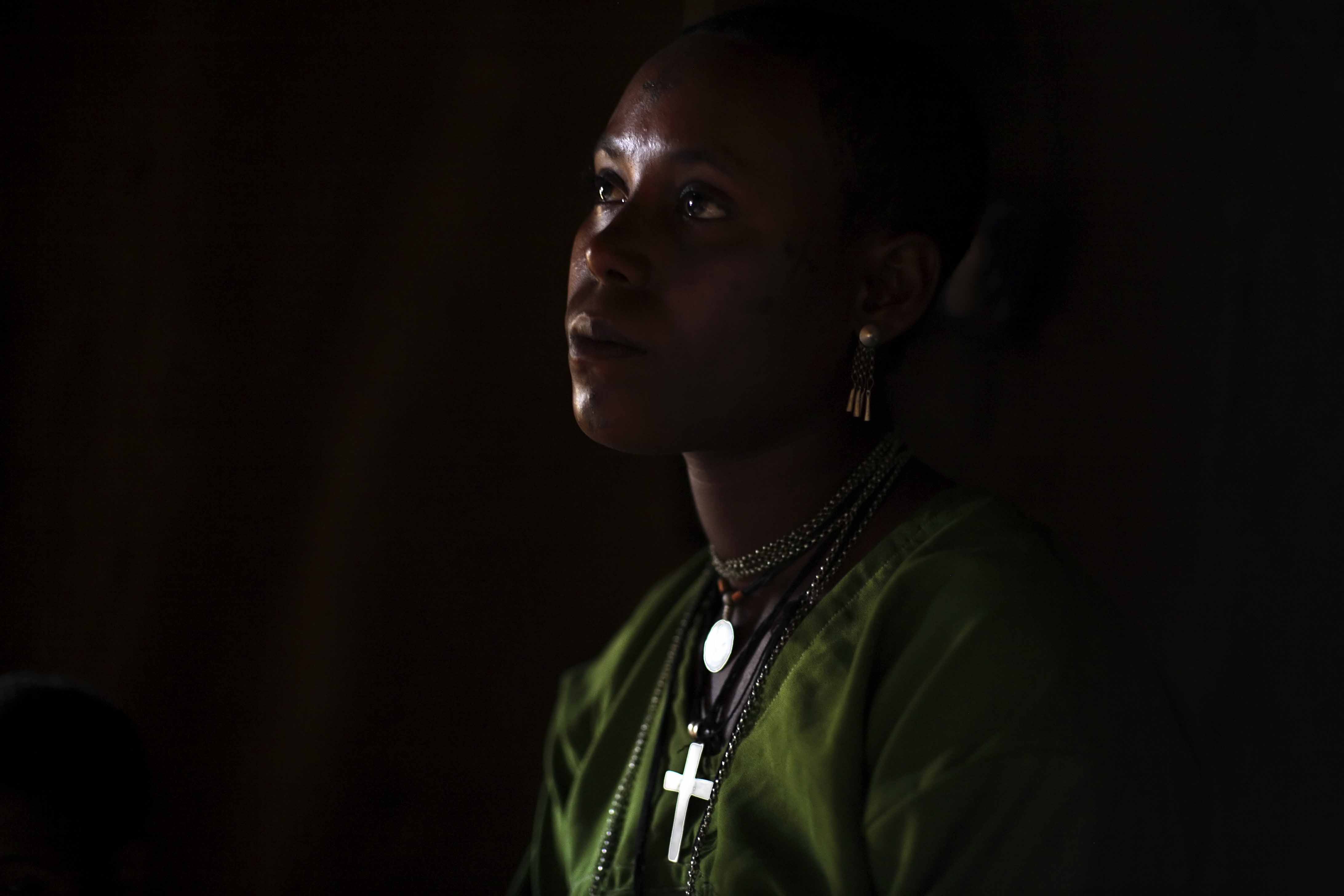 Leyualem, 14, has a moment alone before being whisked away by mule to meet her new groom

in the rural areas outside Bahir Dar, Ethiopia. Child marriage can be found in almost all major

religions and spans more than 50 countries. 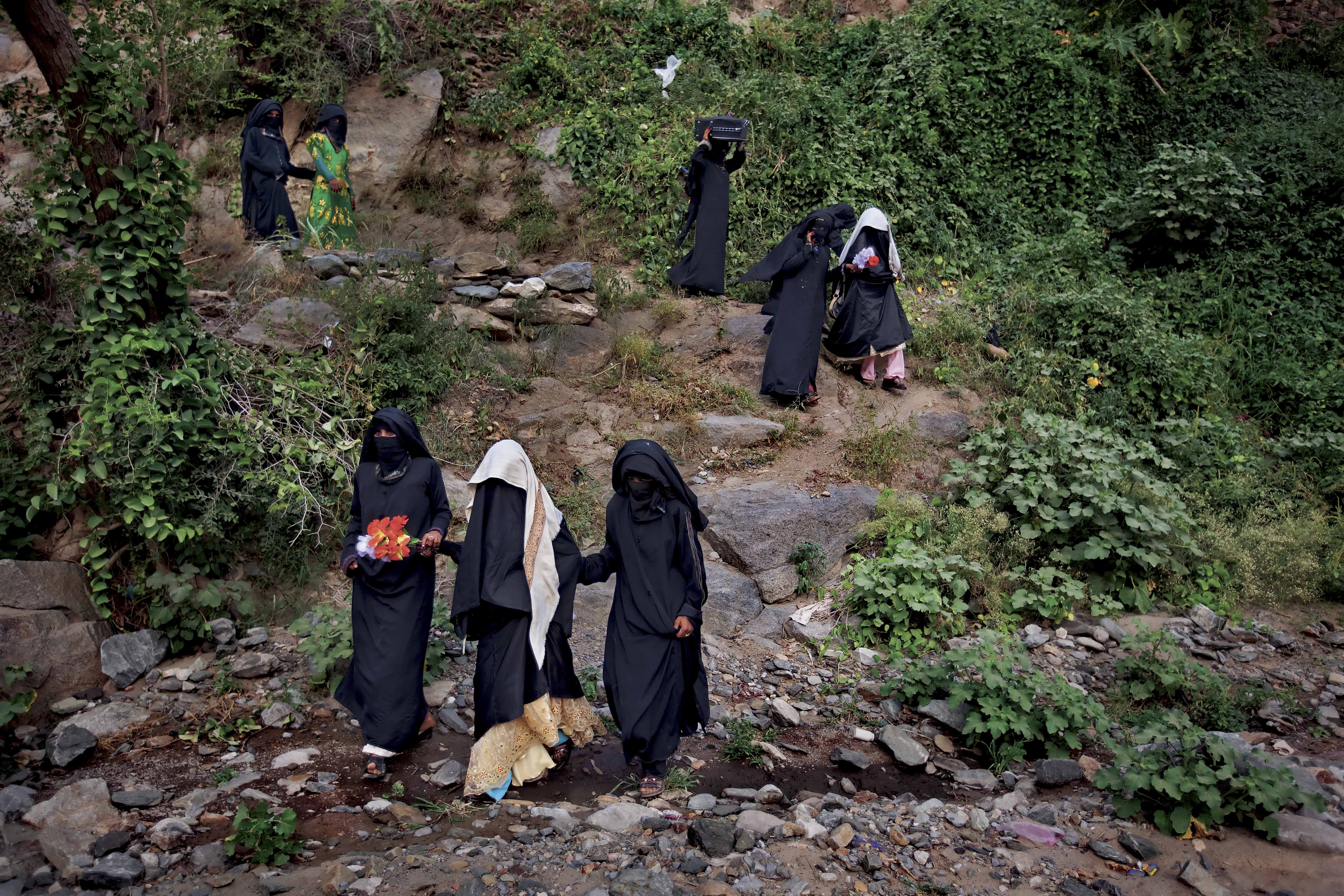 After celebrating with female relatives at a wedding party, Yemeni brides Sidaba, 11, and

Galiyaah, 13, are veiled and escorted to a new life with their husbands. 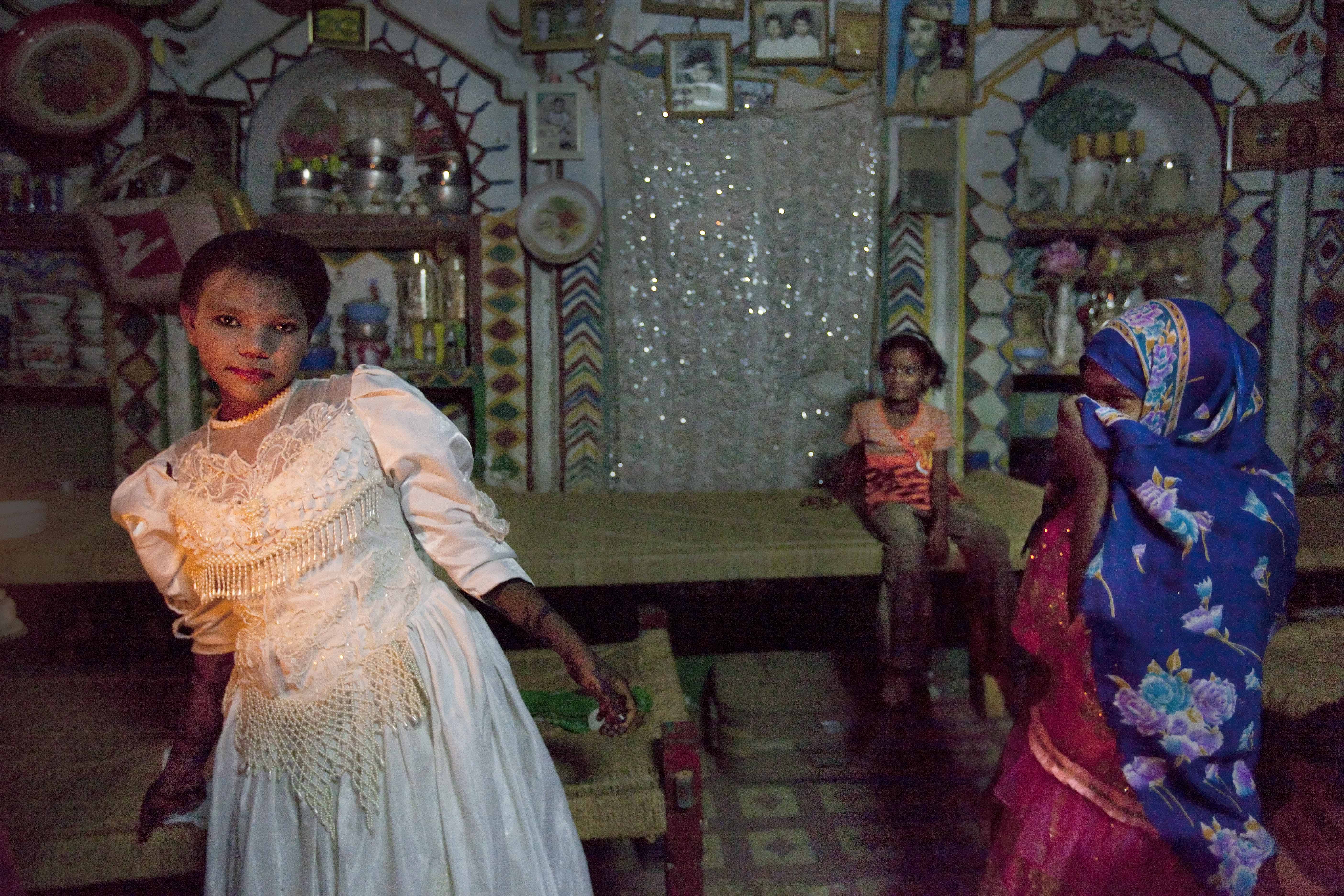 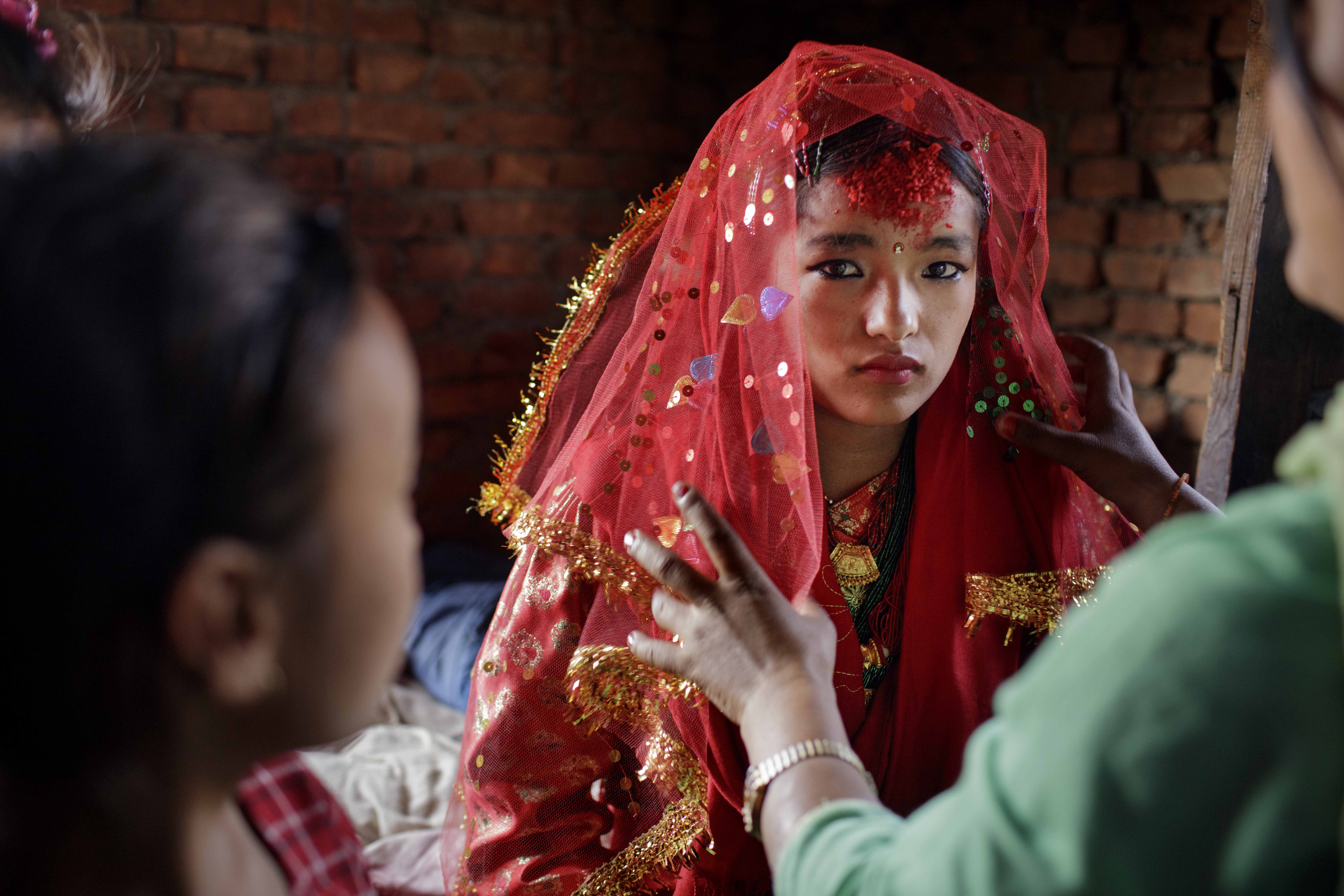 Valley, Nepal. The country experienced a massive earthquake two years ago, which, as other

natural disasters, is likely to increase the rate of child marriage. 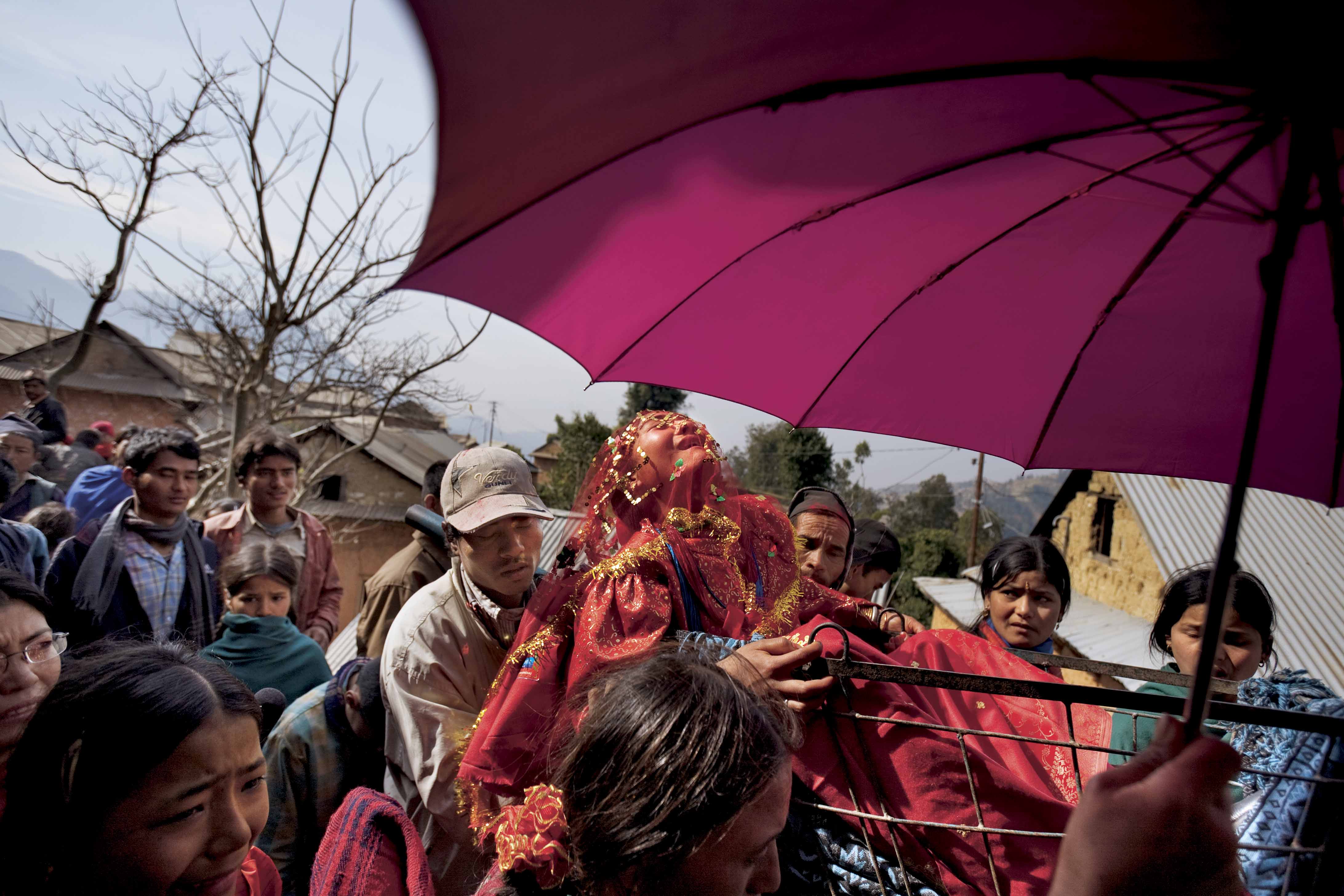 Although early marriage is the norm in her small Nepalese village, 16-year- old Surita wails in

protest as she leaves her family’s home, shielded by a traditional wedding umbrella and carried

in a cart to her new husband’s village. 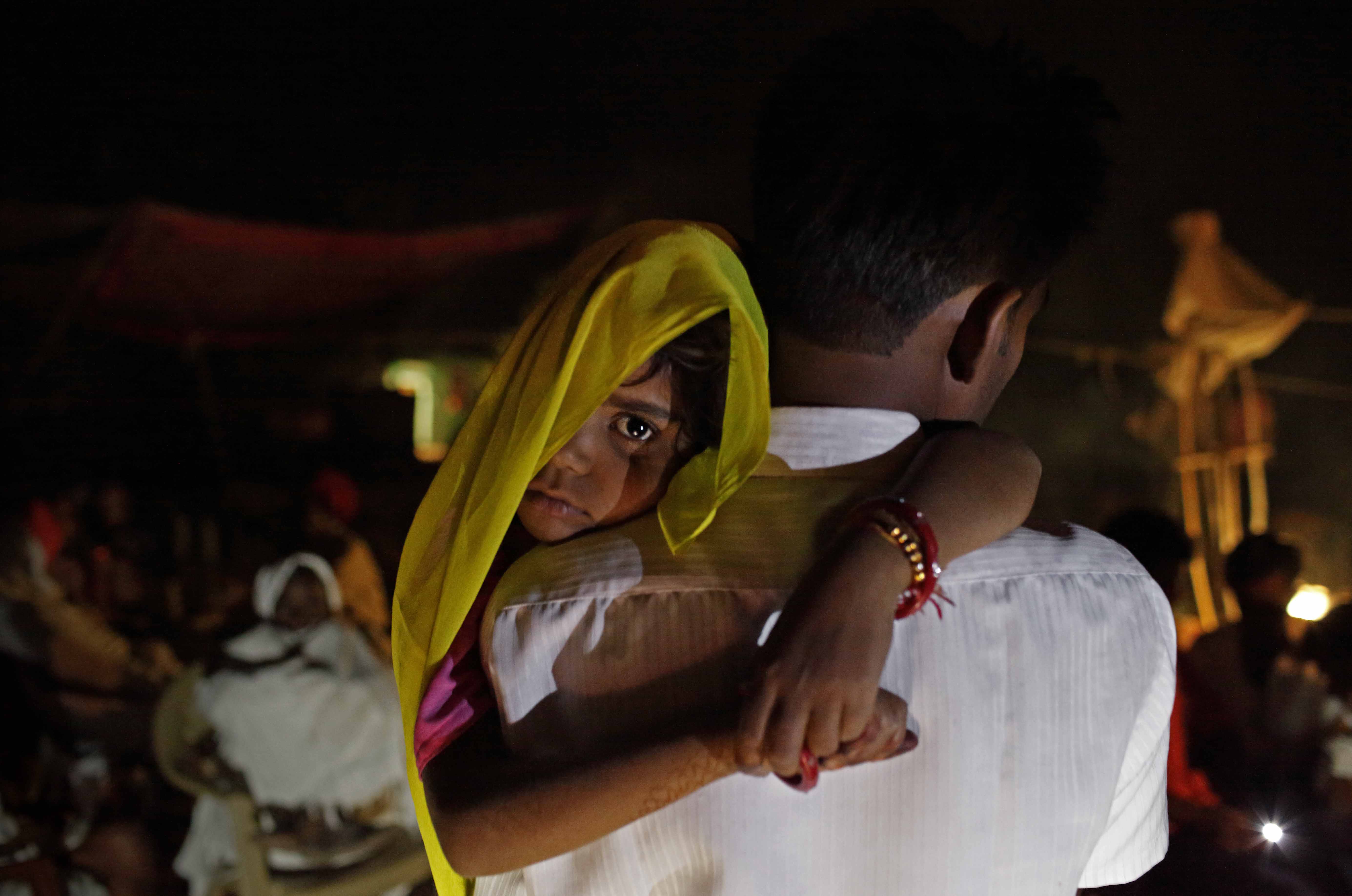 Long after midnight, 5-year- old Rajni is roused from sleep and carried by her uncle to her

wedding. Child marriage is illegal in India, so ceremonies are often held in the wee hours of the

morning. It becomes a secret the whole village keeps, explained one farmer.