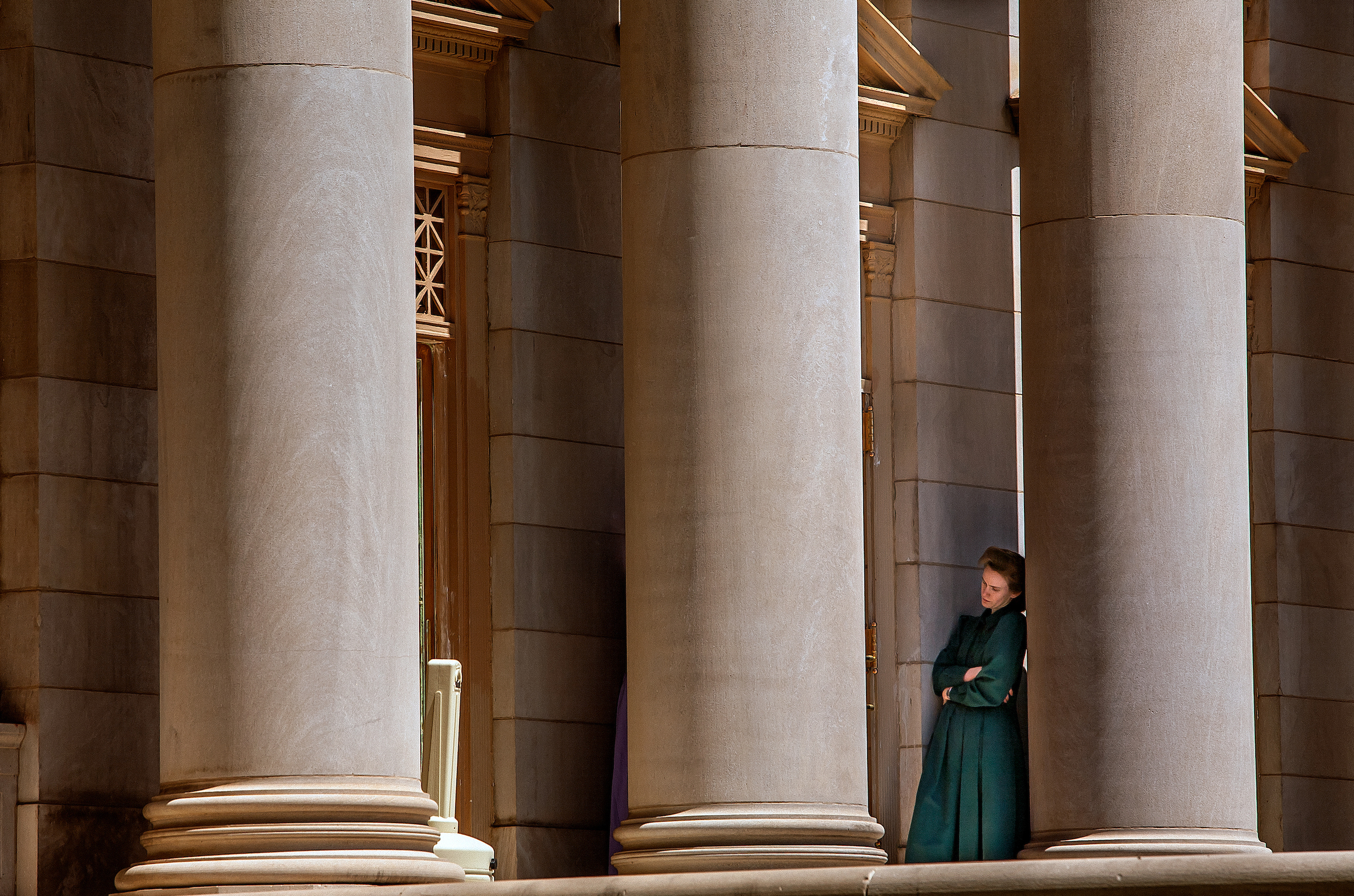 In the largest child abuse case in U.S. history, members of the FLDS attend a 30-day hearing at the Tom Green County Courthouse in San Angelo, Texas. 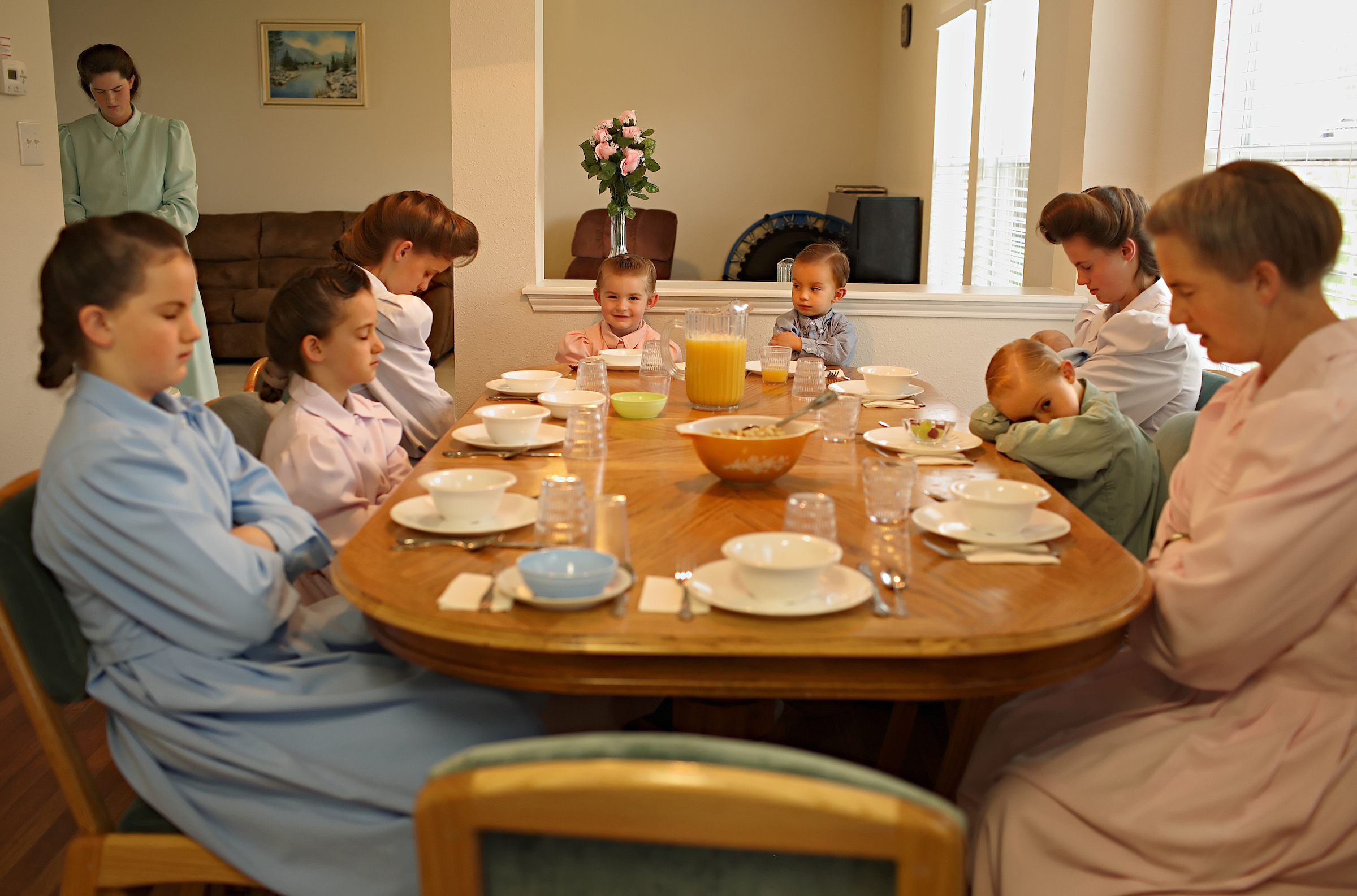 Sally Jeffs (far right) leads her family in prayer before breakfast at their temporary home, which housed many of the girls suspected of being in underage religious marriages. 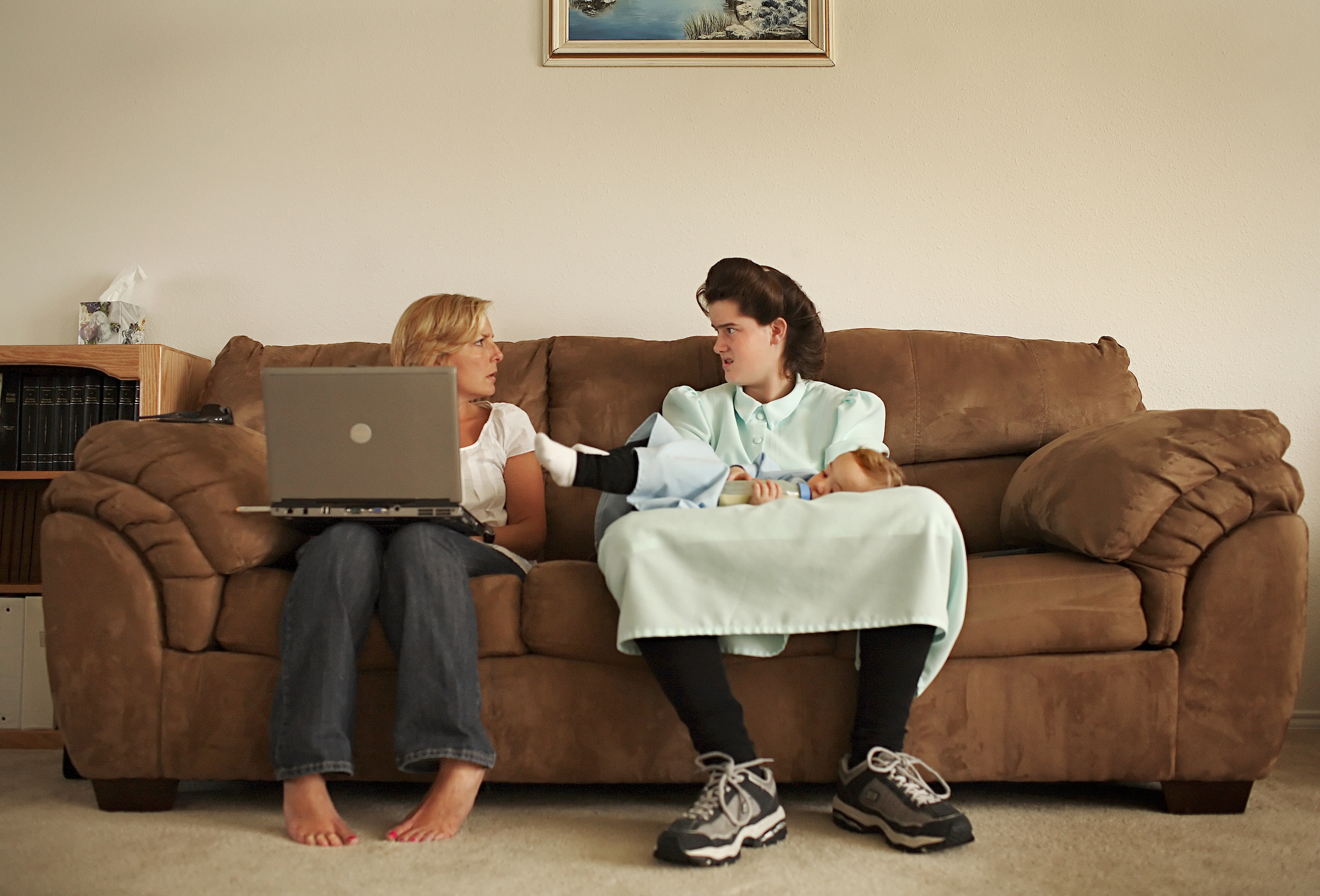 LeAnn Jeffs, 17, meets with her court-appointed lawyer, Andrea Sloan, who was the executivedirector of Texas Advocacy Project. LeAnn refused to testify when subpoenaed by a Texas grand jury. 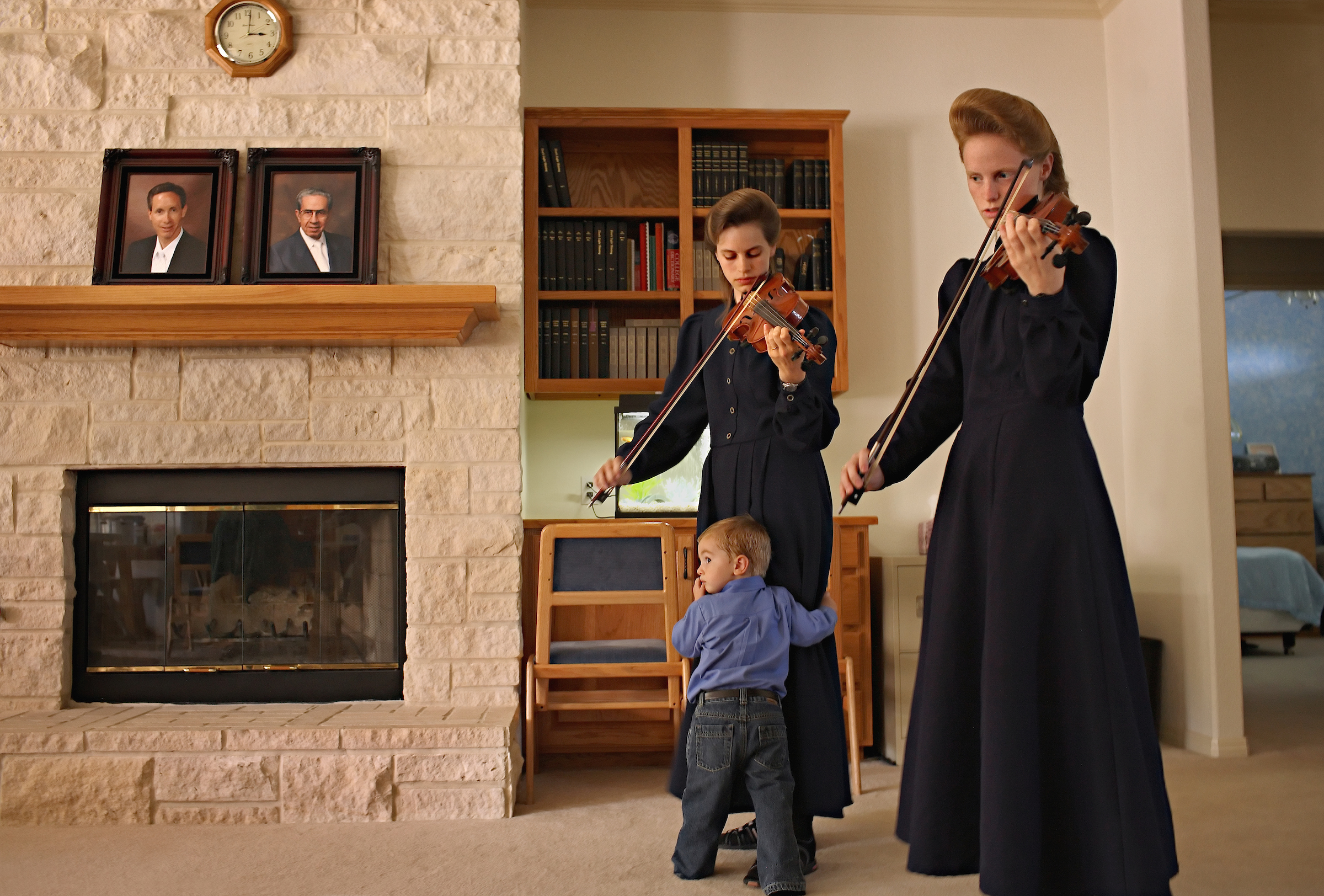 Before dinner, Lenora Jeffs, 20, and Teresa Jeffs, 16, daughters of the convicted FLDS leader, Warren S. Jeffs, play violin in the house where they took refuge after the 2008 raid on the FLDS ranch in West Texas. Portraits over the mantel are of the former FLDS prophet Rulon Jeffs (right) and Warren S. Jeffs, who replaced Rulon after his death in 2002. 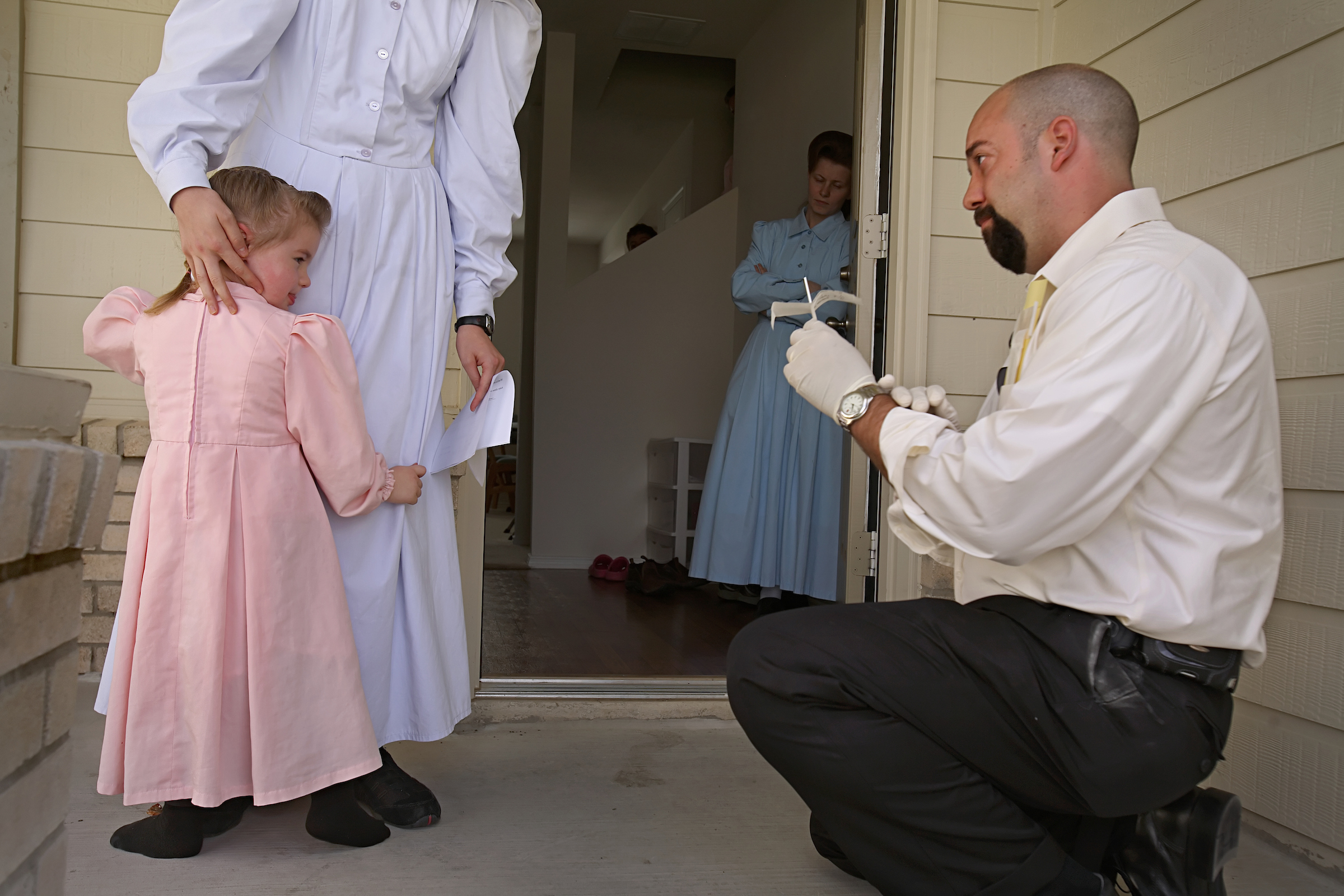 An investigator from the Texas attorney general’s office collects DNA from the 2-year-old daughter of Janet Jeffs, 19, in San Antonio. DNA samples were reportedly taken from some 600 FLDS members, including children, in an attempt to establish a biological link between under-age mothers and older men. 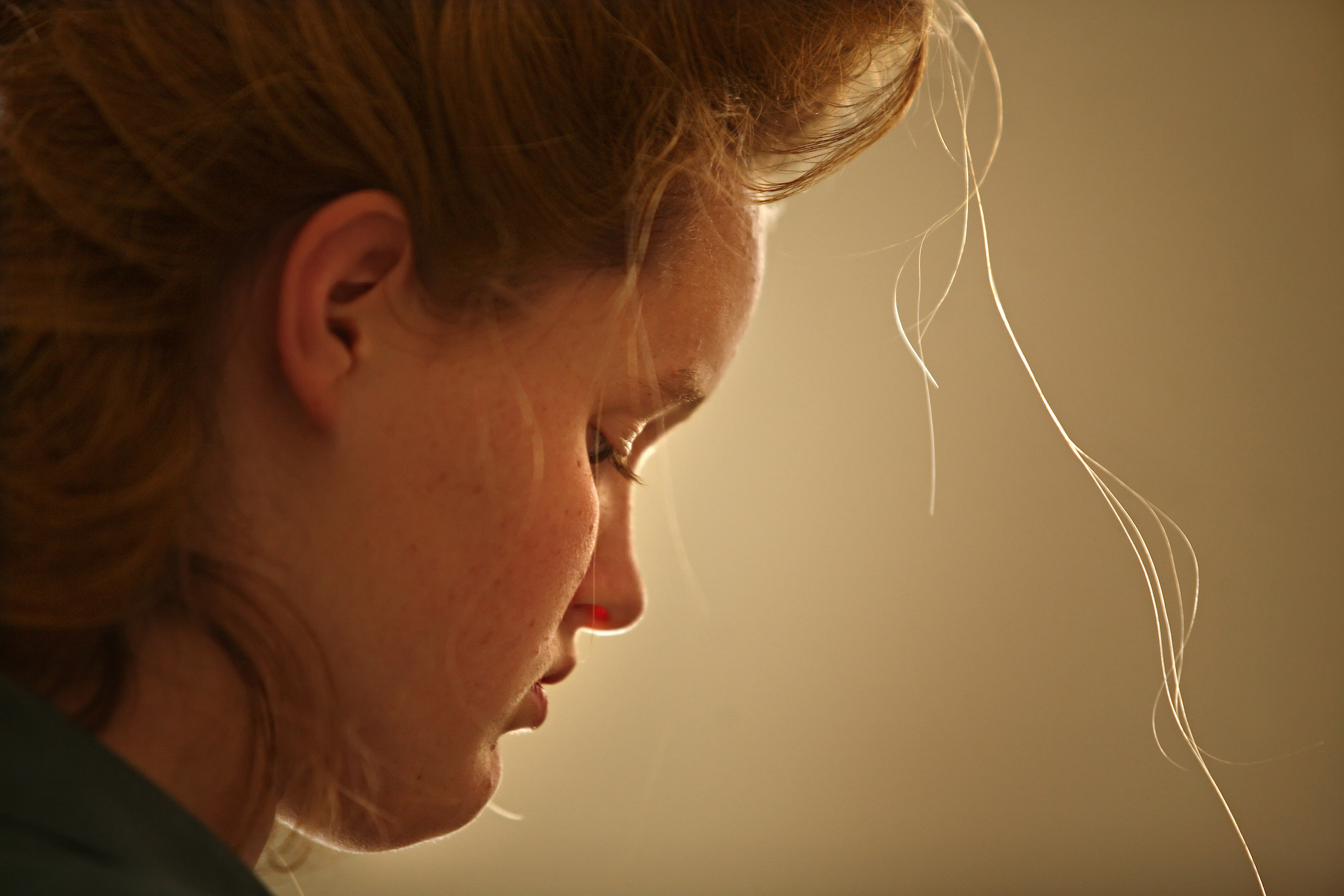 Josephine Jeffs, 15, looks down while braiding the hair of sister, both daughters of FLDS leader Warren Jeffs. Girls in the community are taught to never question their husbands or fathers,to never to turn down sexual advances once “sealed” in marriage, and to have as many children as possible. Going against these teachings could lead to excommunication from the closed-off fundamentalist settlement. 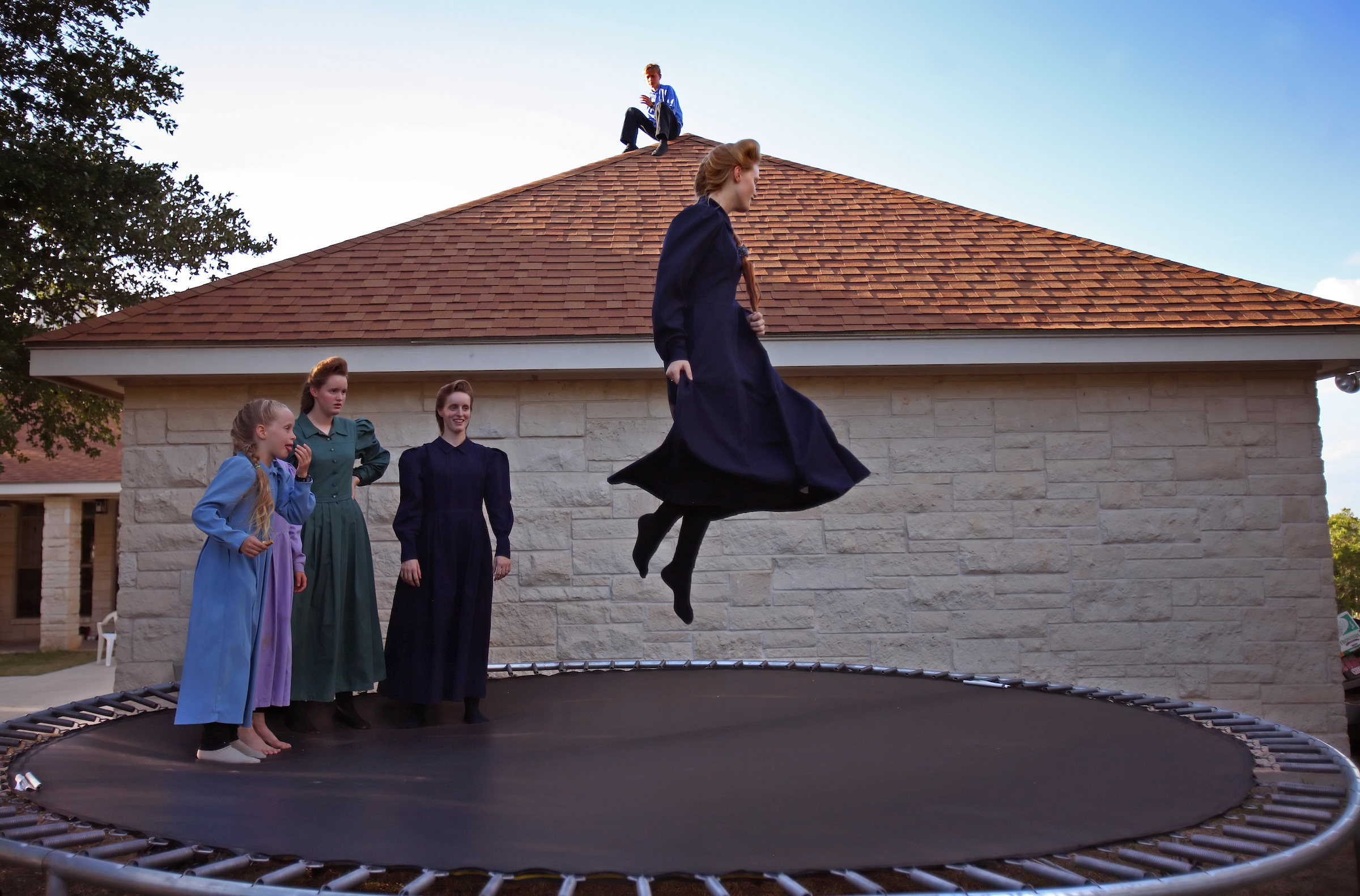 Teresa Jeffs, 16, daughter of jailed leader Warren S. Jeffs, plays on the family trampoline. She was reportedly “sealed ” or married in a religious ceremony to a 38-year-old man, who was later sentenced to ten years in prison for sexual assault. Texas state law holds that unmarried girls under age 17 cannot give consent. 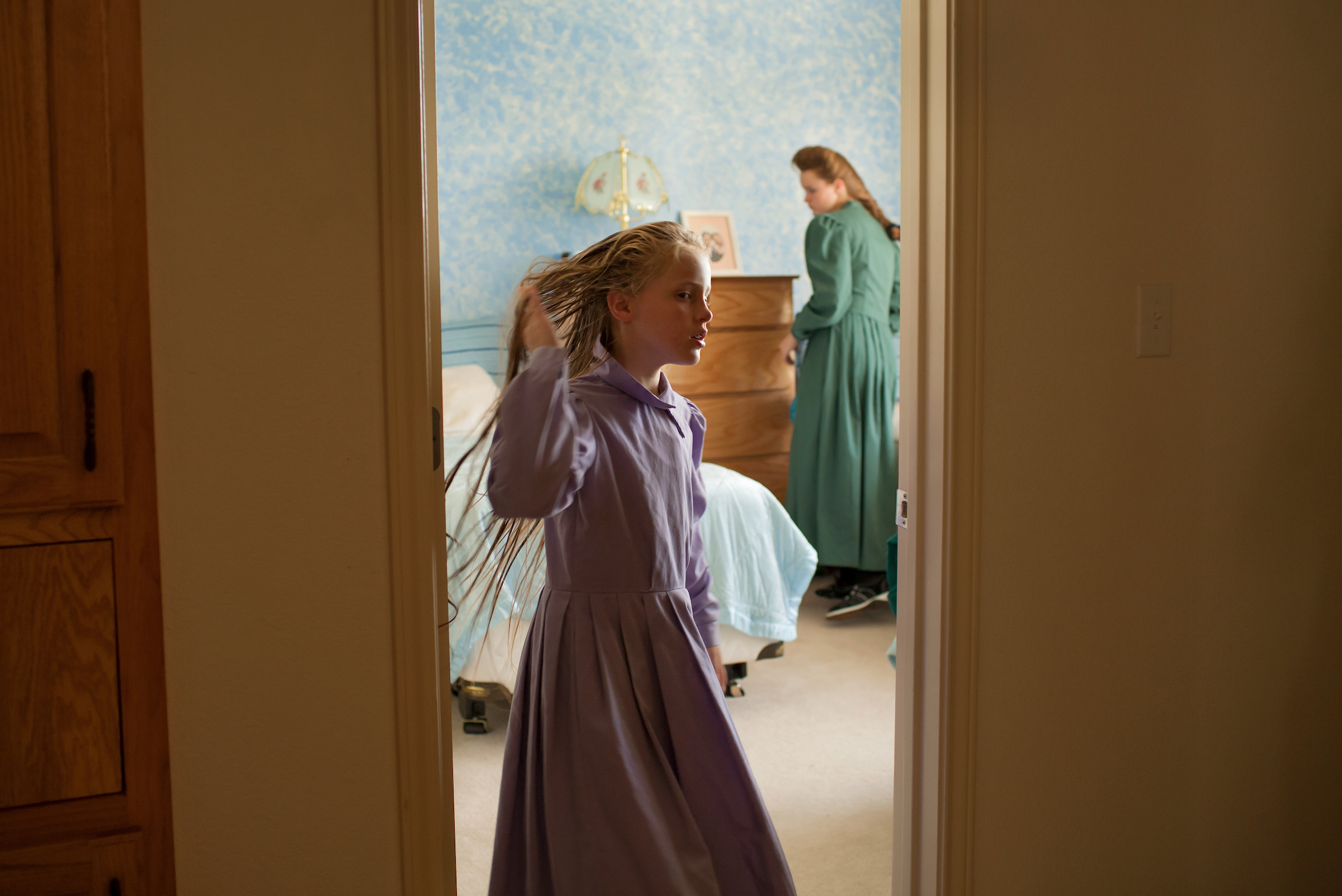 Children of Warren F. Jeffs take refuge from authorities in a Texas rented home after the raid.For the past 10 years, one of the community’s former child brides has pursued a personal injurylawsuit against Jeffs and the FLDS Church over her marriage at age 14 to her cousin. A Utahjudge set a July 2017 hearing to determine the harm the marriage caused her. He will then decide how much she could get, which could be in the millions. 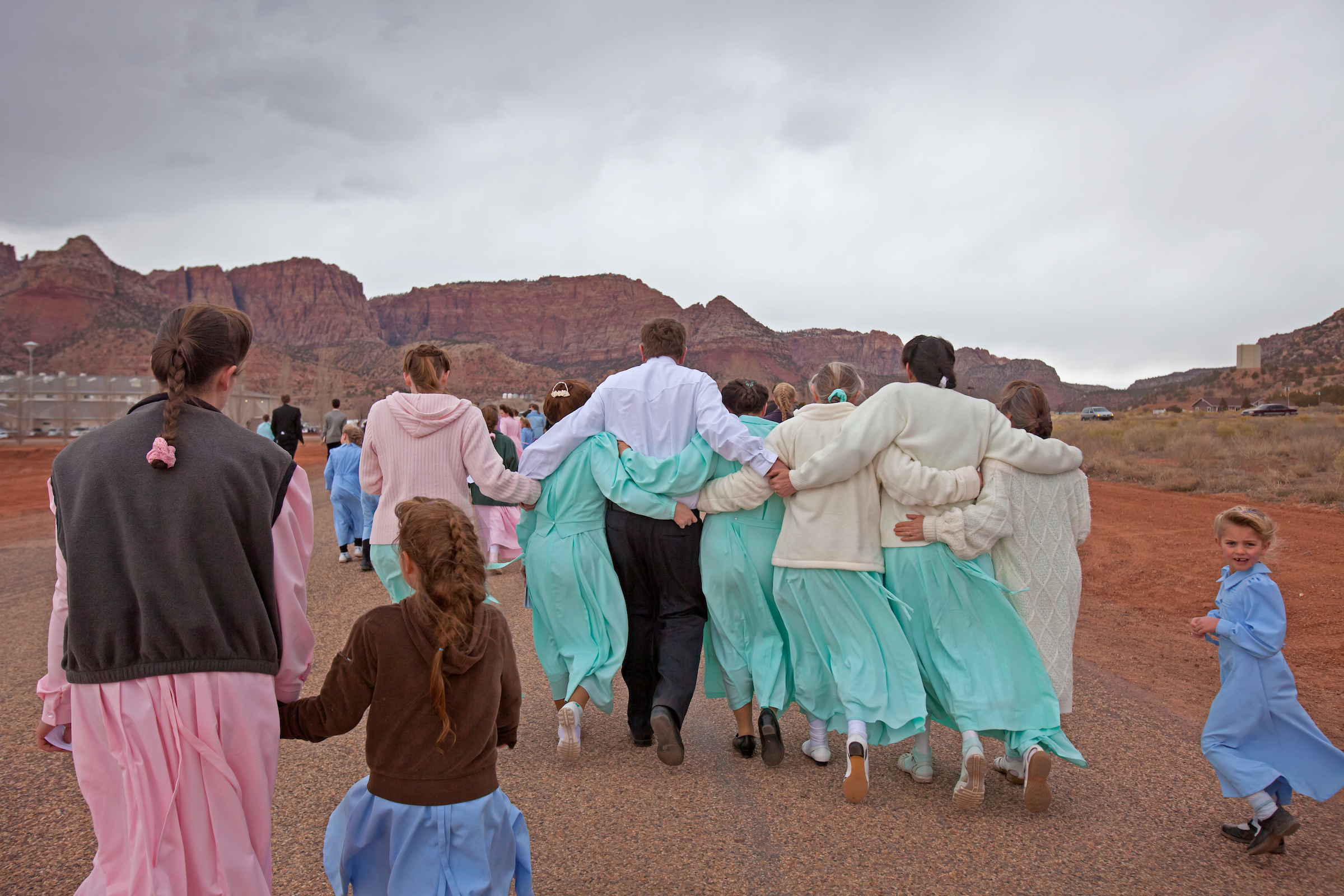 An FLDS man leaves the funeral service linking arms with six of his wives. “They made these dresses especially for the occasion,” he says, “and chose the same color to symbolize the love they share.” Only men deemed “godly” are permitted to enter into plural marriage by the jailed church leader Warren S. Jeffs. 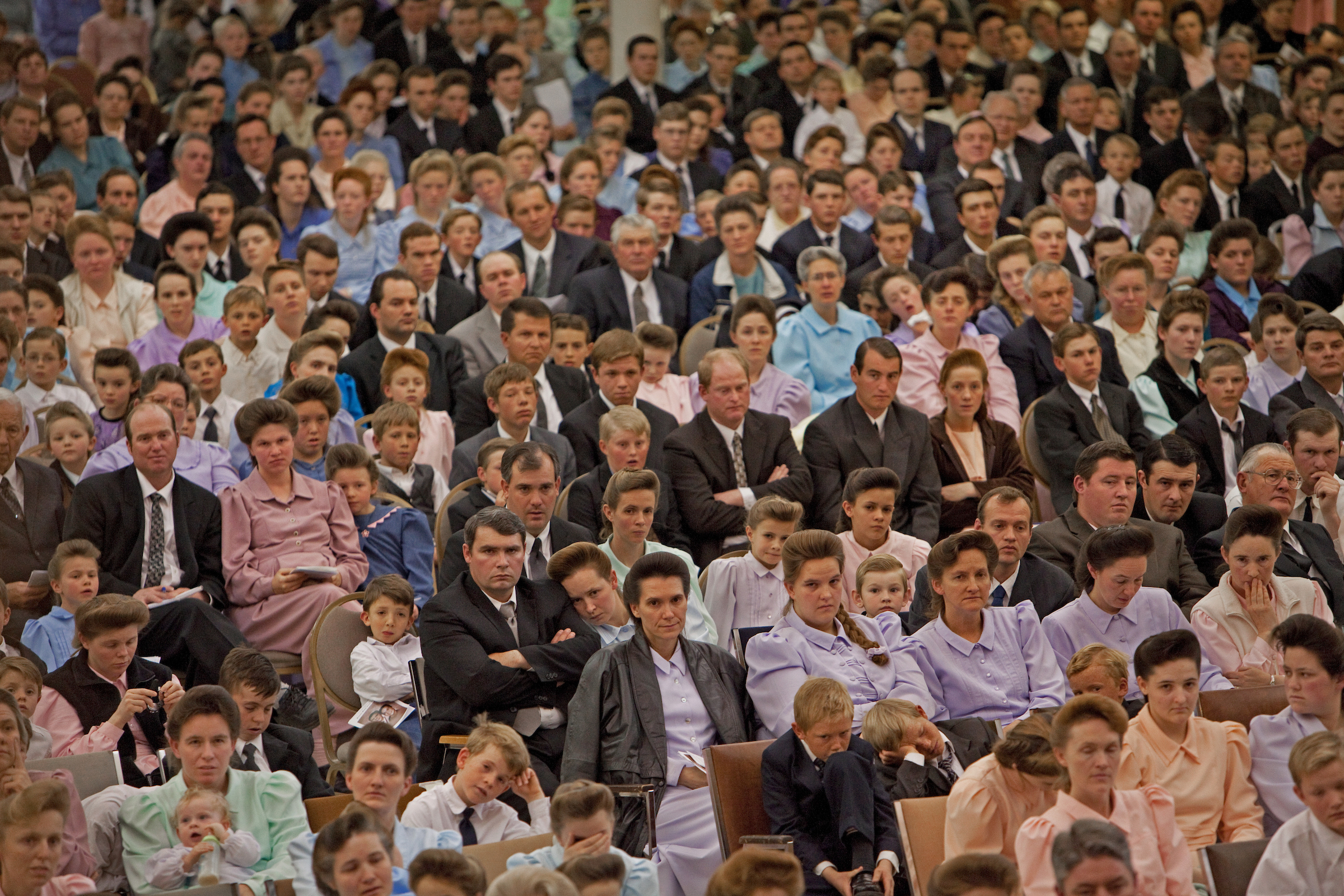 Thousands of FLDS members attend a funeral in Hilldale, Utah. Nine years after the raid,families are still under investigation by law enforcement. Just this year, a Canadian judge from British Columbia’s Supreme Court found the parents of a 13-year- old girl guilty of child trafficking for transporting their daughter across the US border to marry Warren S. Jeffs. 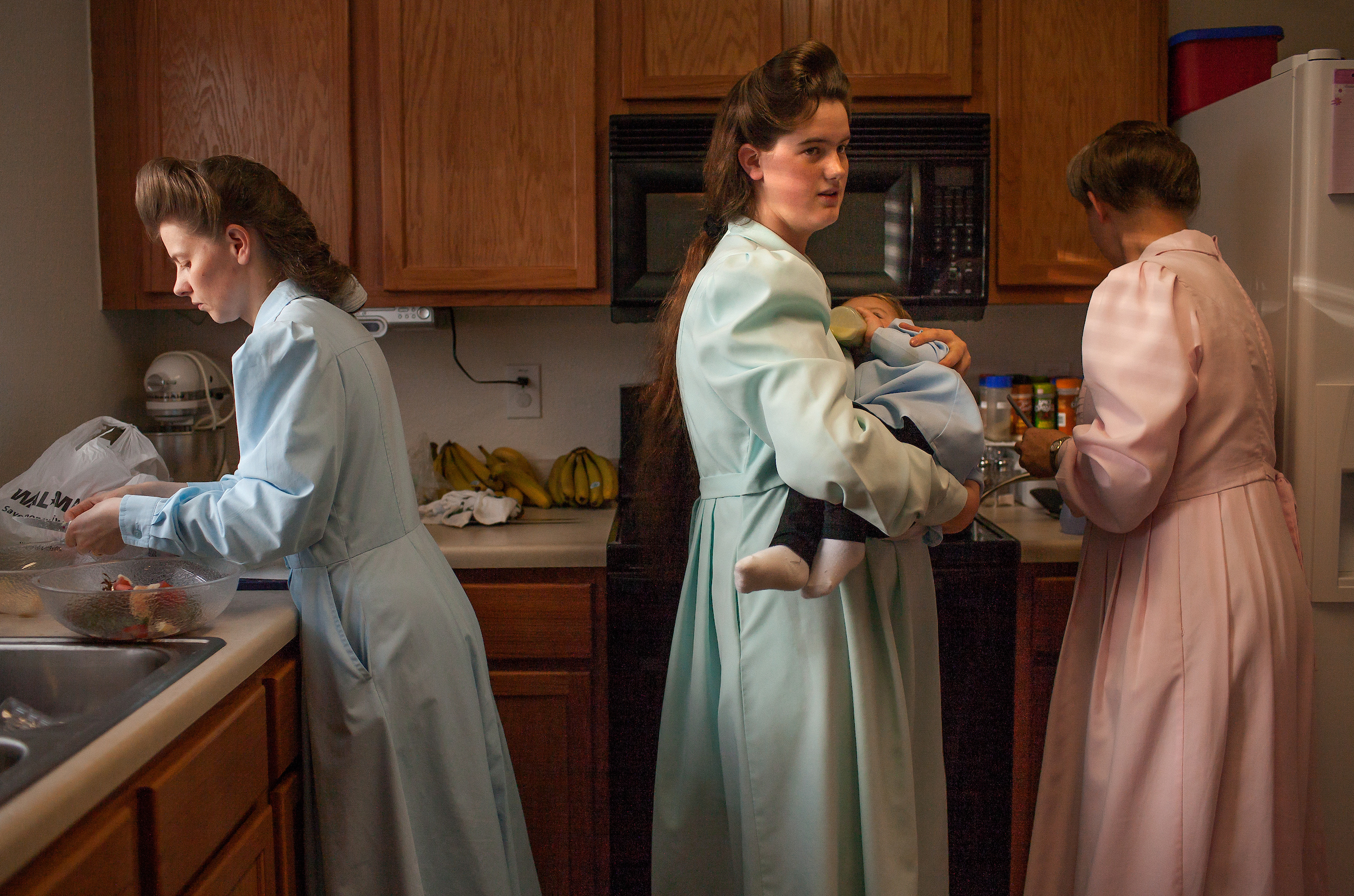 LeAnn Jeffs, 17 (center), and her 1-year- old daughter were removed from the Yearning for Zion Ranch after it was raided by Texas law-enforcement officers in a military style raid. 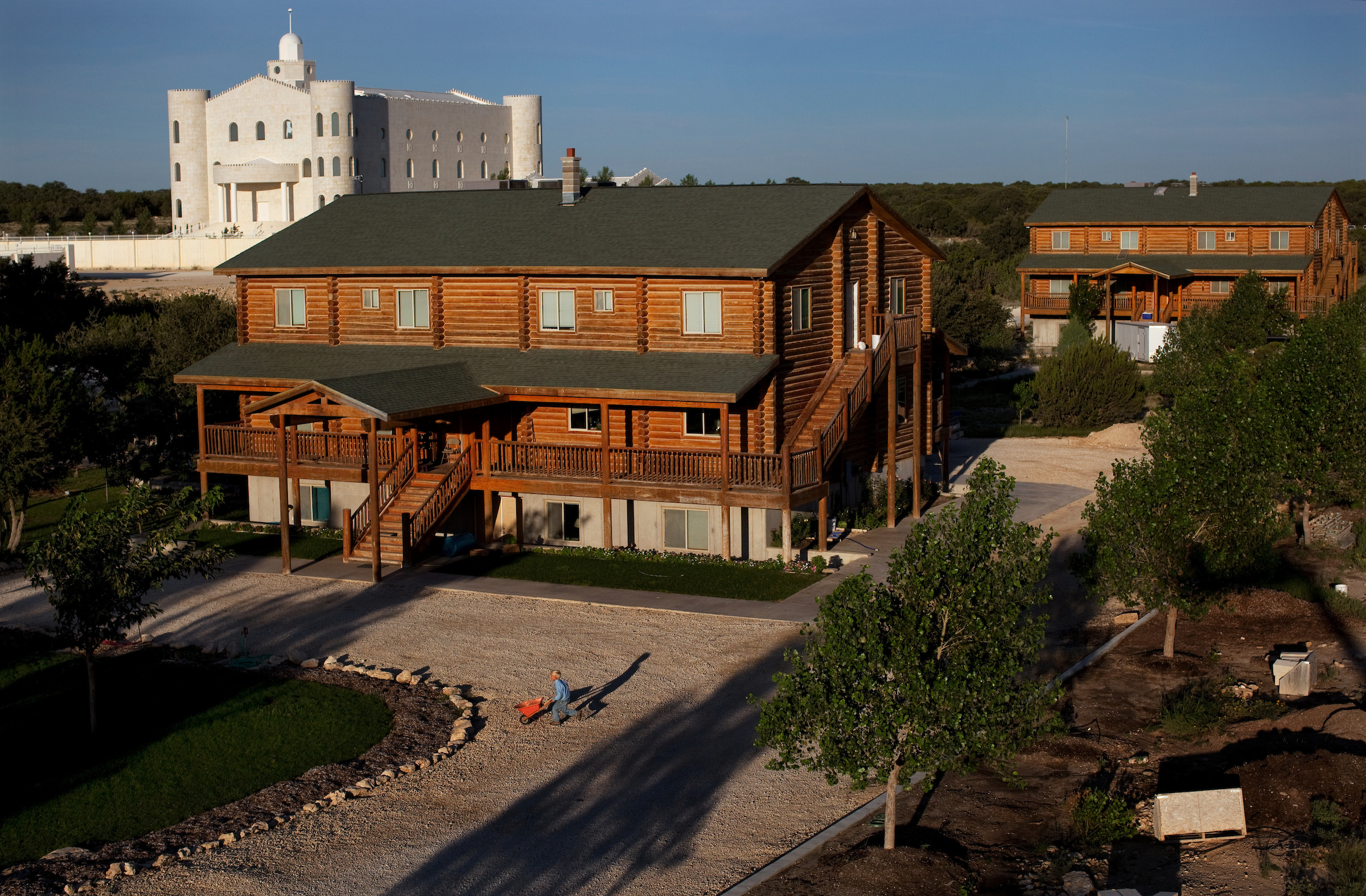 The 1,700-acre Yearning for Zion Ranch, home to the most devout members of the FLDS. The Texas attorney general’s office later seized the property stating Warren S. Jeffs deliberately chose the remote location to shield widespread child sexual abuse and money laundering from the scrutiny of law enforcement authorities. 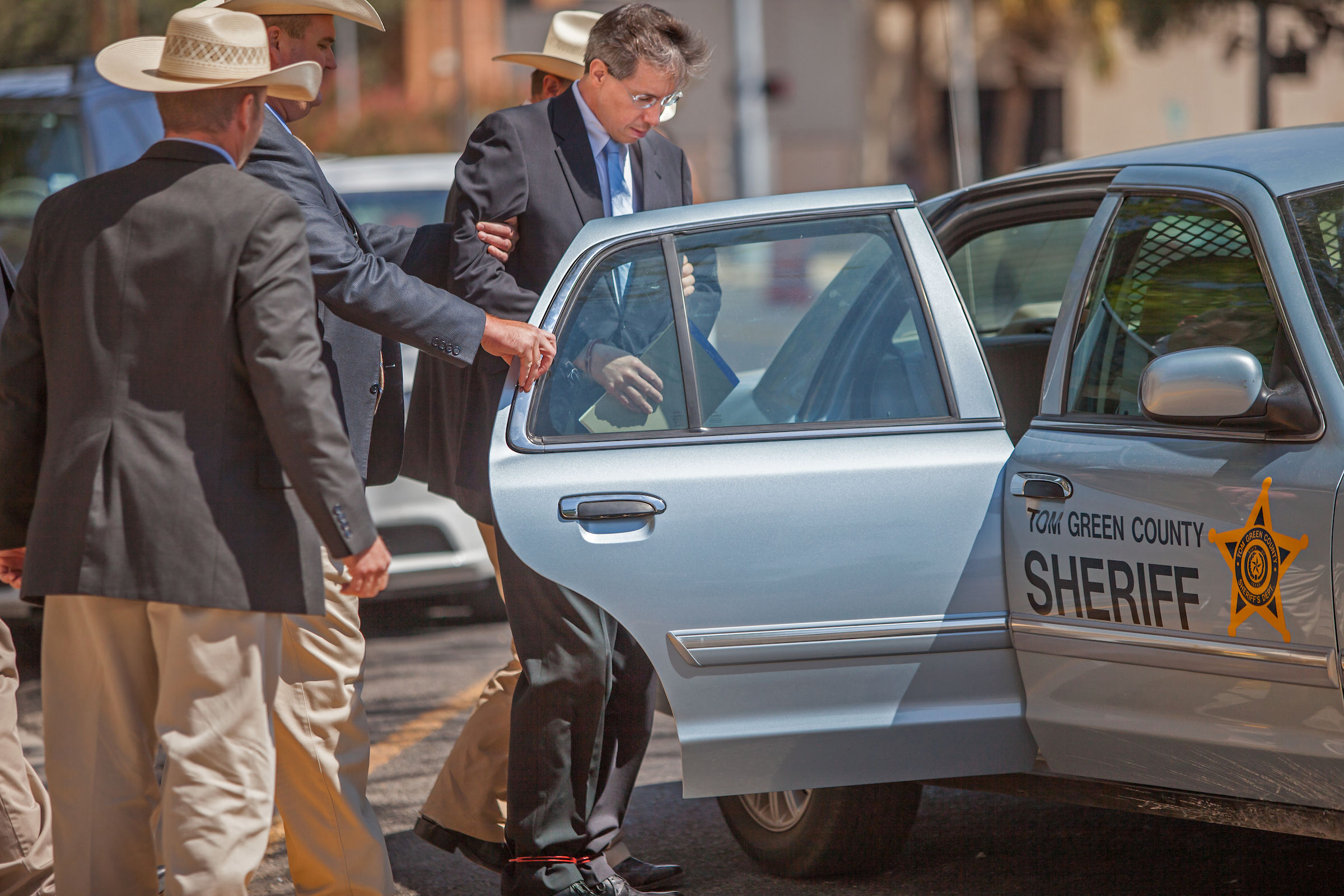 Warren S. Jeffs leaves his Texas trial in handcuffs. Jeffs’ personal records on child marriages were uncovered during the raid on the Yearning for Zion Ranch. The evidence included an audio recording of Jeffs having sex with the several young girls at once.